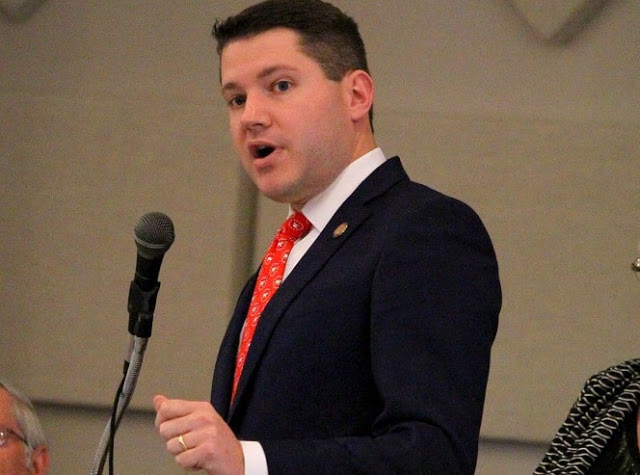 A vocal anti-gay lawmaker has resigned his position after being caught having sex with another man in his office.

Wesley Goodman, a Republican Ohio state representative serving his first term, resigned earlier this week after it came to light that he’d engaged in “inappropriate behavior” of a sexual nature with another man earlier this autumn.

Ohio House Speaker Cliff Rosenberger confirmed the incident in a statement: “I met with him later in the day where he acknowledged and confirmed the allegations.


“It became clear that his resignation was the most important course of action for him, his family, the constituents of the 87th House District and this institution.”

Goodman seemed to also confirm the incident, saying in another statement: “We all bring our own struggles and our own trials into public life,” he said in a statement.

“That has been true for me, and I sincerely regret that my actions and choices have kept me from serving my constituents and our state in a way that reflects the best ideals of public service. For those whom I have let down, I’m sorry.”

According to the Washington Post, Goodman’s website — which has since been taken down — highlighted his conservative Christian credentials and ethos.

He emphasized his commitment to “the fight for conservative principles like balanced budget, lower taxes, repealing Obamacare, life, and religious liberty.”

Goodman is married to a woman, Bethany, and has, according to The Independent, frequently endorsed “natural [i.e., heterosexual] marriage” as the only valid marital option.

According to Goodman’s Twitter, which has since been made private, he describes himself as “Christian. American. Conservative. Republican. Husband to @Beth1027.”

Another Washington Post story suggests this is not the first time Republican lawmakers have been made aware of Goodman’s private sexual behavior, and that not all of his behavior has been consensual in nature.

According to documents and correspondence obtained by the Post, Tony Perkins — of the conservative Christian Family Research Council — had privately urged Goodman to drop out of the Ohio state representative race following reports that he had fondled an 18-year-old at a campaign fundraiser, alongside other similar incidents.

“Trust me,” Perkins wrote then, “this will not be ignored nor swept aside.”