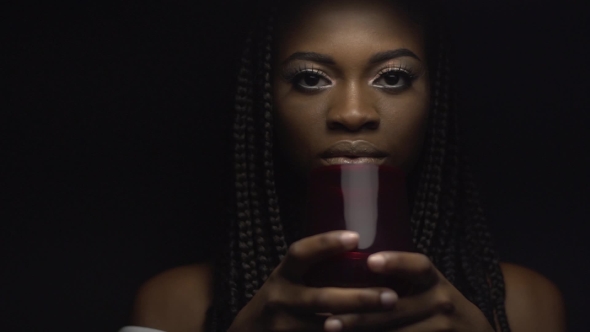 At work that morning, Christian was not himself. He was restless and his fingers trembled when he wanted to write. When he typed, he very often pressed the wrong keys.

But he couldn’t quite place what the thing was. He found his mind taking a different course, a diversion he feebly perceived and couldn’t fully understand, let alone tackle. He was aware that he wasn’t thinking the things he was supposed to think, but he couldn’t help it.

He was going through a pile of papers in the afternoon when he saw Jennifer’s signature on one of the documents.

And then, like the strike of a match in a dark room, knowledge flowed through him. He realized then what he had been feeling he should do. Jennifer.

It was Jennifer he needed to speak with, and possibly see. Now, like on a cinema screen, the image of a straight-faced Jennifer came live in his mind.

He felt she should be smiling and suddenly charged himself with the task of getting her to smile.

He picked his phone and dialled her number. As he put the phone to his ear, a steady tuu-tuu sound emanating from the speaker holes, his heart thudded from anxiety. He prayed hard Jennifer took the call.

Though a part of him, a very tiny lot as it may be, perceived the abnormality in his sudden craving for a lady he despised only some days ago, the greater part of him was now filled with sugary sands of Jennifer.

But Jennifer did not pick the phone.

Christian brought the phone down to his face and hastily redialled the number.

About two or three rings and a female voice said ‘Hello.’

Christian nearly jolted at the voice. Then slowly, raw bliss settled on him.

‘Jen…Jenny, is that you?’ His voice was quavery.

Jennifer was quick to the point. ‘Meet me at Olive Gardens,’ she said.

Christian dropped the phone and began packing up, hastily moving things around on his desk.

Halfway the hall leading downstairs, he bumped into Mrs. Nosa. She was carrying a large file with paper ends sticking out from the edges. She was not so tall and her miniature transparent glasses gave her a funny look, but she looked every inch smart in her prim black skirt and lilac shirt.

‘Good day, Mrs. Nosa,’ Christian threw at her, not bothering to stop.

As Christian halted and turned back to her, he swallowed the urge to take off her glasses and trample them to pieces.

‘I was actually heading to your office,’ Mrs. Nosa said.

‘The Maser’s audit report just came in. I believe you need a copy.’

‘Oh, yes, of course I do,’ Christian quickly corrected. ‘Could you be kind enough to drop it on my desk? The door is open.’

As Christian turned and hurried away, Mrs. Nosa’s eyes trailed him till he was out of sight.

Mrs. Nosa was good with everything that has to do with information, including spotting the sources of new ones.

Susan has always known she is not a very strong woman. Growing up with three loquacious elder sisters hadn’t made anything easier either. She was born that way. And her sisters, especially Florence, who was oldest, teased her repeatedly about it.

It had been funny how they protected her from outside attacks only to turn the attackers once they are at home.

Thankfully, she was much more intelligent than any of them and was daddy’s favourite. Mr. Alphonsus always protected his slow daughter from her loud sisters.

But when daddy died from a cardiomyopathy some years later, and though then her elder sisters, now all married, had stopped bothering her, Susan felt even weaker.

And so she always prayed to God for a new source of strength.

And it wasn’t long till He answered.

He sent her a strong man. One she adored as much as she respected. He married her and became her strength, her grace, her bone. All that she lacked, he complemented.

She adored him, so much so that there were times she wondered what would become of her without him. She dreaded to even let her mind think it.

Sometime ago, barely six weeks after their wedding, Christian was ill with malaria. And as she saw him shake from the chills, his skin hot with fever, tears continued to trickle down her face.

Here was one man with a great part of her. Like a two-piece puzzle, she was completely incomplete without him.

That is obviously why she had locked herself inside the bathroom since she returned from the Montessori with Blossom crying her eyes out. For once again, a deep sense of loss had engulfed her. And this time around, it was even more frightening.

Baby Blossom was asleep in her room. Susan had made sure she had slept off before coming upstairs. The last she wanted is to allow Baby Blossom see tears in her eyes. Drawing her daughter into her fears.

She always faked the smiles, always lied her way through about why daddy no longer ate with them, prayed with them, played Hi-Five with her or even shouted at mommy.

Though sometimes she felt her little girl understood more than she was given credit for.

Susan had quivered as if from shock that evening her husband, for the first time since they met in the university, raised his voice at her.

She had only quietly enquired if all was well at work.

‘Yes, everything is fine at the office,’ Christian had said, his eyes not leaving the paper in his hands. He sat cross-legged on the couch, his face concealed behind the broad paper.

These days he came home every day with a newspaper. They provided him with the diversion he needed to refrain from interacting with his family. Especially during the weekends.

Susan came to sit beside him. She placed one hand on his thigh. ‘Baby, if there is anything, you can tell me. You are obviously—’

‘There is nothing, I told you already,’ Christian said, his eyes still not leaving his paper, even though the letters now appeared blurry to him and he couldn’t quite remember what he had previously read.

‘Then what is it?’ Susan said, her voice taking on a questioning note. ‘You come home every day, you don’t talk to anybody, you don’t touch your food, you don’t even play with your daughter anymore!’

‘Are you alright?’ Christian stood. ‘Is something wrong with your head?’

Susan was startled. Each time, she shivered at the highness of Christian’s voice.

‘So I can’t even have peace in my own house any more without you interrogating my life out!’

He threw the paper at her and stormed off up the stairs.

Susan saw Blossom walking out from her room and quickly wiped off the thread of tear trickling down her face. She applied a smile and lifted Blossom into her arms.

Susan shook her head quickly. ‘Mm-mm, mommy is not crying, honey,’ she said. But she feared the trembling in her voice might have given her out.

But Baby Blossom did not ask any further questions. She reached and touched her mother’s plump cheek and then pressed herself into her.

But the next day, as Susan was driving her to school, Blossom asked, ‘Mommy, why has daddy changed?’

She was strapped to the passenger’s seat beside her mother.

Susan had felt an extra thud in her chest as she heard the question. But she had smiled and rubbed Blossom’s hair. ‘Honey, daddy is just having a tough time at work,’ she lied. ‘He will come around, okay?’ She stared at her baby till she nodded.

Now she stood from the edge of tub where she’d been sitting and wiped her eyes. She pulled off her gown and entered the tub. She never bathed with cold water, but that afternoon she ran the cold tap instead and tried to find peace in the chill.

But the coldness only gave her goose bumps and made her fingers quivery. It did not do anything to abate her gloom.

She was still in the room when she heard noises downstairs. Still on the stairs when she saw who it had been.

Christian had walked in with a tall woman by his side.

She watched Okon, their gatemen, drop a big brown bag beside the glass table.

‘Welcome to my home,’ she heard her husband say.

The tall woman pressed herself into him and they kissed.

‘Daddy?’ Baby Blossom was clutching Mrs. Peterson, her big, furry doll, as she walked out of her room.

Sighting her baby, Susan ran down the stairs in quick, hurried steps and picked her up. She turned and in a second was running up the steps again.