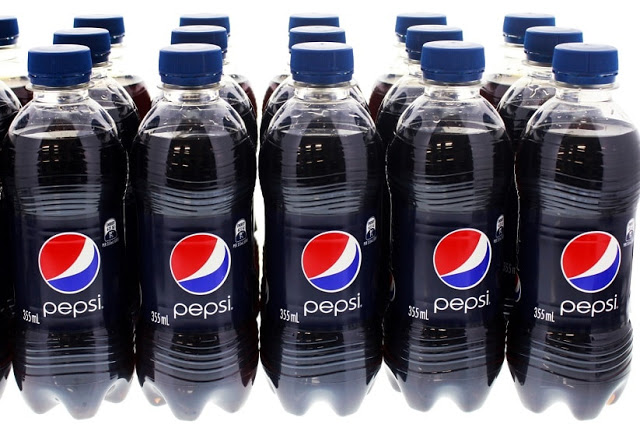 Online rumours claim that a disgruntled worker at a Pepsi factory has contaminated bottles of the soft drink with HIV-infected blood during the production process.

This warning has been spreading online since around 2011 and despite its dire claims, it is completely false.


As we see with many persistent online rumours, this particular warning has morphed and evolved several times, and the specific claims made in the warning may vary depending on what permutation of the rumour you happen upon.

For example, one of its earliest variants – below – that circulated through email in 2011 vaguely stated that the incident had been covered on the mainstream news (it hadn’t.)

“FWD: FWD: Please DO NOT drink any pepsi soda, it was on the news, a worker from that company has put blood contaminated with AIDs inside the bottles!!! Please forward!!”

Also in 2011, this religious-themed variant also advised readers to avoid drinking Pepsi for the same reason – only this time, in classic “friend of a friend” urban legend style, it claims the unknown author’s cousin first issued the warning.

“I just got a text from my cousin saying Do not drink any pepsi soda, a worker from the company has put blood contaminated with AIDS inside the bottles so yall please be careful cause it’s some sick people in dis world and the devil is busy so lets pray for people like that GOD BLESS…”

Soon after, another variant falsely claimed the rumour had been confirmed by NDTv, an Indian television company.

These variants also mentioned the incident also affected other products including Frooti Drinks and Coca Cola, though failed to explain why unrelated companies would also have been involved.

In 2017 an updated version circulated claiming to show the man (pictured in handcuffed) who had added his infected blood to Pepsi products.

However the pictured man was actually Sadiq Ogwuche, a man arrested as a suspect of a bombing in Nyanya, Nigeria in 2014. 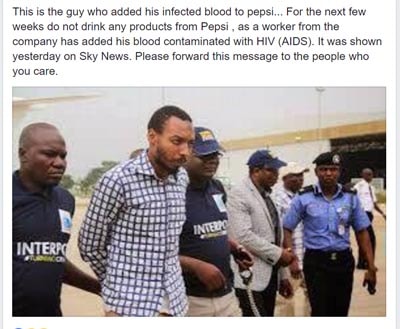 Despite the persistence of these silly warnings, they’re just untrue. It’s an example of scarelore – folklore designed to alarm readers unnecessarily.

Not only have there been no reputable reports that someone attempted to taint Pepsi drinks in this way, according to every authority on the virus, HIV cannot survive for very long outside the human body.


The virus is extremely sensitive to changes in alkaline or acidity and given the acidic nature of Pepsi drinks, any HIV infected blood would be rendered incapable of passing on the virus to someone who later consumed a tainted bottle.

Additionally, the CDC also weighed in on the rumour, claiming that there is simply no risk of catching HIV from any type of food item.


HIV does not live long outside the body. Even if small amounts of HIV-infected blood or semen was consumed, exposure to the air, heat from cooking, and stomach acid would destroy the virus.

Therefore, there is no risk of contracting HIV from eating food.

The claim that foodstuff is being nefariously used to carry the HIV virus – or some equally malicious disease – is a popular one, and has circulated in one form or another for a number of years.

In previous years, tomato ketchup, oranges and even bananas have all been targeted by similar – yet equally spurious – hoaxes.

But it’s all false, and please don’t circulate these rumours.

This article by Craig Charles originally appeared on ThatsNonsense.Com.