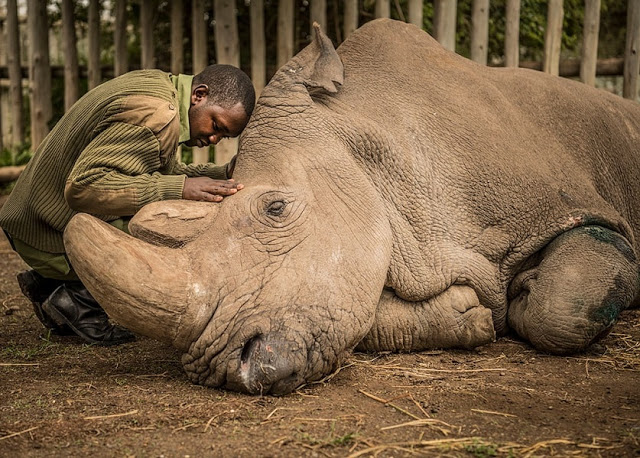 The death of the 45-year-old white rhino called Sudan, the last male of his species, struck a real blow to conservationists all around the world.

Sudan who leaves behind just two females in the entire northern white rhino population at the Ol Pejeta Conservancy in Kenya had been in poor health in recent days, riddled with age-related issues and multiple infections.

A veterinary team made the decision to euthanize Sudan after his condition deteriorated significantly.

The white rhinoceros is the largest of the five species of rhinoceros.

The color of the white rhino body ranges from yellowish brown to slate grey.

So why is the species named white rhino?

A popular theory of the origins of the name “white rhinoceros” is a mistranslation from Dutch to English. The English word “white” is said to have been derived by mistranslation of the Dutch word “wijd”, which means “wide” in English.

The word “wide” refers to the width of the rhinoceros’s mouth.

So early English-speaking settlers in South Africa misinterpreted the “wijd” for “white” and the rhino with the wide mouth ended up being called the white rhino and the other one, with the narrow pointed mouth, was called the black rhinoceros.

“Sudan was the last northern white rhino that was born in the wild. His death is a cruel symbol of human disregard for nature and it saddened everyone who knew him.”

Human factors such as habitat destruction and unsustainable hunting and harvesting have left most of the world’s precious species critically endangered and on the verge of extinction.