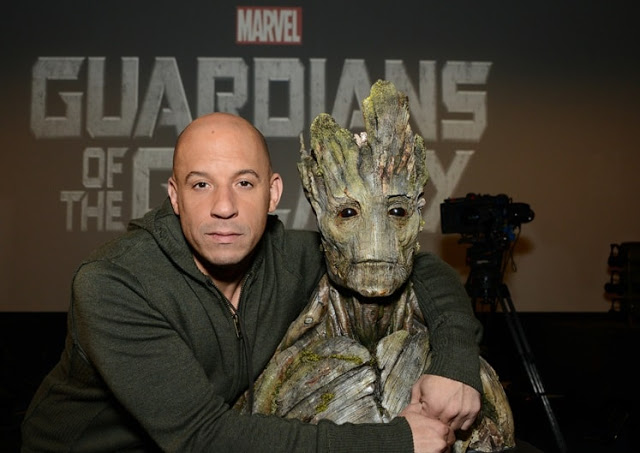 Speaking during an interview with Maria Menounos, Vin Diesel explains how Marvel sold him the idea to play the walking, talking alien tree, Groot in the Guardians of the Galaxy franchise:

“You have to understand, when I met with Marvel it wasn’t for anything immediate. It was to talk about a film that would be introduced in the Phase Three part of Marvel – So, not for a few years. You wouldn’t be able to see it for a few years, and in my mind Marvel was doing it right. They were enrolling me at the ground level which is the best way to enroll me.

I had heard over the last year people on the social media page saying ‘what’s up Vin? Why aren’t you going to Marvel? Why aren’t you doing anything with Marvel? It would be a crime of cinematic history for you not to be.’ So I’m thinking this Marvel thing is becoming really, really important to these people. Okay, what can I do? What should I think?

I get the call, I go down to meet with Marvel – a great meeting. I mean it was just… it was even talking about something so big I can’t even talk about because it’s like a merging of brands in a way which I won’t get into, but that was way, way, way, way down the road.

According to Diesel, that art is what led to him posting an image of Groot on his Facebook page.

“So they said, they wanted me to play a tree. They said there was something akin to Iron Giant about this tree, and everyone knows I’m a sucker for the Iron Giant. But I’m still like,” as he balances his hands and squints, emphasizing he was skepticism about the part.

So, when Kevin Feige and James Gunn said we ‘want you to voice a character that historically is known for only saying one line’ it was not dissimilar to David Twohy saying ‘I want you to do Riddick but I don’t want you to interact with anyone in the whole first act.’ There’s something challenging about that and fun about that.

…to make sure I was on the right track I took the book of conceptual art into the room with my kids and I opened it up to the page where all five Guardians of the Galaxy characters are and I say, ‘who do you think they want daddy to play?’

And my daughter so quickly pointed to Groot. From that moment on I was Groot!”