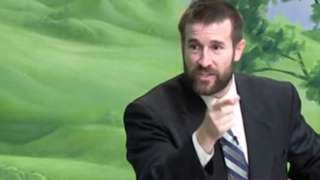 South Africa has banned an outspoken American preacher from entering the country after he described its former archbishop Desmond Tutu as “a pervert in a pink dress”.

Steven Anderson, a far-right evangelical baptist who has called for homosexuals to be killed, was due to visit Johannesburg this weekend as part of a global “soul-saving mission”.

Last week, as debate raged in South Africa about whether he should be granted entry, he described the home affairs minister a “wicked domite”, a “joke” and “backward” after he met with gay rights groups over the issue.

On Tuesday, Malusi Gigaba said a dossier handed to him of Mr Anderson’s remarks confirmed that he was guilty of hate speech and “promoting social violence” and therefore banned under the immigration act.

“These interventions will not be the panacea to our own social short-comings, of prejudice and discrimination,” he said. “They will however provide us an opportunity to learn, or better unlearn, our own bigoted views and hateful beliefs.

“South Africa has its own mending to do, we do not need more hatred. Steven Anderson will be advised that he is not welcome.”

Mr Anderson, a father-of-nine from Sacramento, California, rose to notoriety in 2009 after saying that he wanted President Barack Obama to die from brain cancer because of his support for abortion.

The Arizona-based preacher, who sees a surge in interest for the sermons he posts online with every controversial comment, also celebrated the shooting dead of 49 people at an LGBT nightclub in Orlando as meaning that there were “50 less pedophiles in this world”.

On Monday, he told a South African radio interviewer that the former Cape Town Archbishop Desmond Tutu, a national treasure and Nobel Peace Prize laureate for his conciliation work during apartheid, did not understand the Bible because of his tolerance for homosexuals.

“The religious leaders are a bunch of perverts themselves like that Desmond Tutu who goes around in a pink dress,” he said.

Responding to the South African decision, Mr Anderson revealed he had also been banned from visiting the UK.

” I am not even allowed to have a connecting flight in London,” he wrote on Facebook. “I feel sorry for people who live in SA, but thank God we still have a wide open door in Botswana. Stand by for reports of MULTITUDES saved in Botswana, where religious freedom still exists.”