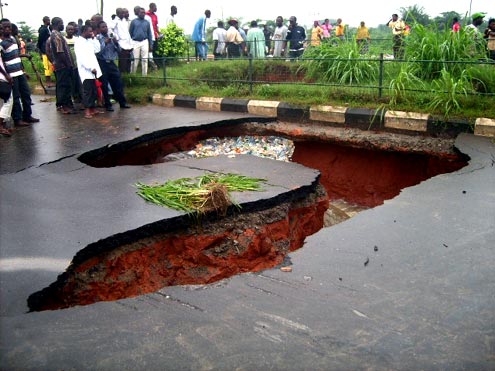 You never know how bad a country is until you depart from it, view other countries and then return.

Let me give you a great lot of reasons why Nigeria is a failed state:

1. I grew up in an area where jungle justice was on the rise and the inhumane results were scattered nationwide.

Bodies were left on the road for days with missing body parts having being used for juju. This was in the 90′s.

Fast forward to 22 years later, jungle justice is still on the increase, though lesser bodies are seen on the streets now.

Now suspects are being killed for being suspects, the Nigerian police don’t respond to any emergency unless you pay for their petrol, the medical ambulances are non-existent and you basically die quicker than you would have thanks to a failed system that doesn’t assist Nigerians in any way.

The government seems to think that fixing roads is a sign of good faith and that is always first on their agenda to boost ratings. So to put it straight to you, your life as a citizen (or foreigner) is always at some form of risk.

It is a norm in every sector of business, between families and in the government. Corruption is a way of life in Nigeria and it is really hard to get rich without being corrupt. Even in your workplace, corruption is expected to happen with no contingency plans.

It has become a norm simply because of the dire and painful means of survival that the country offers you. You sweat too much to make just a cent. Even the most basic of things are too scarce for one to afford.

3. It is extremely hard to do business in Nigeria especially when you are an expat or returnee.

Things that an average Nigerian would consider normal can frustrate and deteriorate your business prospects as there is no functioning legal system.

The legal system is in the pocket of the wealthy. If you are poor in Nigeria, or even average, it is hard to win any case in court.

People you’d consider close would never invest in your ventures because they fear you’d become greater than them.

Power failure can wreck your production and efficiency; government laws change like the weather; the Nigerian economy is very dependent on another man’s currency; the slave mentality instilled by the colonials keeps Nigerians in agony as most federal jobs are given to foreigners — even the regular jobs that should be given to a Nigerian is given to a Caucasian simply because of the mere colour of his skin.

4. The medical system is bonkers!

Millions of women still die during or after childbirth. You hardly find up-to-date IT or medical equipment in hospitals.

You can only find them in very private hospitals which the average Nigerian cannot afford. There are so many under-trained and undervalued doctors, most of whom are eventually forced to leave the medical field to seek other means of survival, e.g. the physiotherapists, neurologists and dentists.

To put it simply, if you are not curing any popular disease, infection or illness, you might be out of work for years as the government doesn’t invest as much as they should in the medical sector.

Federal doctors have annual strikes, long queues to get treated are rife in government hospitals, and your workplace is always cleaner than the average Nigerian hospital. And a lot of doctors are corrupt too. They even diagnose false illnesses just to squeeze out extra cash from you.

5. Everyone aspiring to work for the government only aspires to steal.

Government jobs are seen as a source of immunity, especially when you work for any of the forces or law enforcement unit.

The average force worker aspires to get to a higher position where he or she can give orders and embezzle funds made for his colleagues or the public. So this makes majority of the forces useless.

Let me give a few examples: the government bullies the Nigerian Customs and licensees to generate over 1 billion naira every month (about 2.8 million euros using today’s rate); the police force is pressured to make more money for the headquarters so their bosses could split the proceeds; the air force and navy literally do nothing all year round than act like a regular office; the military junior offices are sent to wars and when some die, they are pronounced missing so some General can embezzle money they are entitled to in case of death…I could go on and on because I come from a family of civil servants.

6. The current finance minister was imported and hadn’t lived in Nigeria for years so she knows nothing about the consequences of her decisions.

How does one impose taxes on citizens when the minimum wage in Nigeria is still below 70 dollars/60 euros a month in an economy where inflation is at its peak and living conditions are super expensive? The taxes that the average citizen pays are never used for anything but increasing the pocket size of some individuals in government.

To top it off, we have the biggest economy in Africa (so the West claims) yet we still borrow money from IMF and other nations every bloody year.

I forgot to add that our senate members are the highest paid government officials in the world. A senate member makes more money than any country’s president in the world. Down the list of over 12 things he is being paid for, one of them is called the Hardship Fund, a sort of bulletproof to protect senate members from the recession.

I could rant on and on, but believe me, Nigeria is more than a failed state.

A Nigerian passport costs more than a Western country’s permanent residence permit/green card or passport, yet you go through hell to get one internationally only to be discriminated against across borders all over the world.

The Nigerian green passport always raises some form of alarm or suspicion.

I am Nigerian and there’s nothing to be proud of when it comes to my country except its brilliant and hardworking people, plus its diverse cultures.

Besides that, being a Nigerian is a waste and I will gladly give up my citizenship anytime because it comes with no benefit to its citizen.

It only takes away from you.