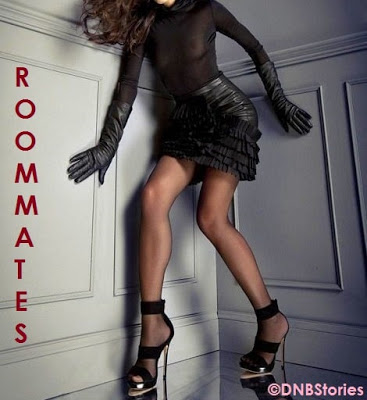 Gloria left her and ran into the kitchen to grab a piece of cloth.

Abuchi charged toward Segun at once. ‘Are you okay?’ He seized him. ‘Are you mad?’

As the two buff men struggled and exchanged blows, Georgina, who now looked to have taken the job of a news reporter, turned to Gloria’s husband: ‘Madam, sorry, Oga, they are fighting.’

With a blood-stained finger she touched Mr Iyke, who seemed too stunned by the whole situation to show any movement at all. ‘Oga, he threw a dagger at me and now he is fighting my husband.’

Gloria appeared with an old napkin.

Gloria stood still for a few seconds before coming over and taking Georgina’s bleeding arm.

Finally, Mr Iyke appeared to have gotten himself and began scrolling down his contact list immediately. He dialled off a number.

As Gloria tried to cover the cut with the napkin, Georgina looked yet again at the blood stains on her fingers and then turned to the fighting men. ‘Aunty, did you see what is happening now? They are breaking things, Aunty!’

‘Turn this way!’ Gloria said. She grabbed Georgina’s wounded arm and finally turned the napkin round the cut to close the wound.

Finally, the gate man answered Mr Iyke’s call and in a matter of seconds he’d flown into the room.

And it was him, this thin-bodied, late-middle-age-looking man that eventually separated the fight.

With Abuchi’s help, he was able to pin down the intruder and they tied him up.

The new private clinic on Ogbunike Street saw an influx of patients yesterday.

Not too long after a classy middle-aged woman in labour was wheeled in, a LASTMA van brought in two bleeding accident victims.

Though the woman in labour had put up quite a bit of drama, the way she seemed more interested in her hair and makeup than her contractions, but it was the case of a young lady bleeding at the arm that drew the most attention.

‘He stabbed me and still had the guts to fight my man? He will see!’ Georgina continued to curse. ‘He should just pray that nothing happens to me, otherwise—heey! Otherwise!’

She shook her head. ‘He should just pray that I did not die here, otherwise! In fact, even if I die that would be the worst for him because my ghost will haunt him. I will make sure I haunt him till he runs mad. He will see!’

‘Georgina, that’s okay,’ Gloria said. ‘You will not die. And you have no need to concern yourself now with whatever happens to Segun. The men have driven him to the station and I’m sure the officers will deal with him accordingly.’

As Georgina continued to groan and curse, the classy woman in labour did a sort of waving and murmured and said: ‘Oh, please can someone get that stupid girl to be quiet for once?’

Unfortunately, Georgina heard this. And she stopped and turned back to the woman. ‘Madam, what did you just say?’

The woman adjusted herself in her wheelchair so that her protruding belly appeared to bob. ‘You are making a hell of noise, young lady! This is a hospital and as you can see I am about to have a baby!’

‘So what if you are giving birth to the next Jesus Christ?’ Georgina said. ‘Is that the reason you will call me stupid?’

Strangely, this woman seemed ready for trouble. She waved. ‘Oh shut up already, will you? Who else makes this kind of noise in a hospital reception if not someone very stupid and vacuous?’

With one hand, Georgina snatched the handle of the wheelchair from the nurse holding it and rolled off the woman down the gleaming hallway.

Everyone’s eyes fell wide open in shock, including the administrator attending to the woman.

Finally, and quite luckily too, the nurse chasing after her caught her halfway from the adjacent wall.

She took some seconds to regain herself and then turned to the nurse: ‘I thought this is just a normal clinic, why didn’t you tell me you admit mental patients here too?’

‘Madam, she is not a mental patient,’ the round nurse said behind her.

‘Oh, clearly she is. She is. What other signs do you need to diagnose her?’

‘She is not—’ The nurse’s words were cut off by the woman’s sudden scream.

Puffing, she said: ‘Oh God! The contractions are back!’ She did her style of delicate waving again. ‘Please get me into the ward already and pull this thing out of me! I’m done! I’m really done!’

She puffed again and looked round the place. ‘And why is Solomon not here yet? How many hours does it take now to fly from London to Nigeria? I warned him about this! I did! I told him to get me a surrogate. I told him! Now look all the trouble he’s put me into and he is not even here to help me deal with any of it!’

‘Madam, you are in the hands of professionals,’ the nurse said, comfortingly, ‘you absolutely have no reason to worry.’

‘You know what? Wheel me to the airport, I can no longer have this baby in Nigeria!’

‘Wheel me to the airport now, please?! Mention any amount, I’ll pay you!’

‘Madam, you are in Lekki. The airport is almost an hour away in a fast car, not to mention a wheelchair!’

‘So you think it is not possible?’

‘No, it is not. You are already in labour and your baby will come any minute from now.’

Finally, they were at the door of the delivery room assigned to her. The nurse pressed a button, pushed the door open and eased her in.

Shortly after a doctor came and Georgina was guided into her own ward, April arrived in a taxi with an unconscious Loveth.

But it wasn’t until the next morning that the two parties saw each other.

Georgina, guided by Abuchi, had come out for some air when April saw them.

The hospital reception was wide and exquisite.

‘Oh my God, what happened to you?’ April made to touch Georgina’s now bandaged arm and she flinched away.

‘I was stabbed. Who told you I was here?’

‘I really can’t say. Someone knocked on the door and she went to check who and the next thing I heard was this great loud scream. When I got to the door, I saw Loveth on the floor, unconscious.’

‘Ward 19. The doctor said she will come around before noon.’ April looked at Georgina’s wounded arm again. ‘What happened to you?’

‘Is it not that mad boy called Segun. They sent him but he failed.’

‘The fool came to the house last night and stabbed me.’

‘Not only that. He stabbed me and started beating Abuchi, can you imagine that? If not for our security man that intervened, the two of us would have been admitted.’

‘He wasn’t actually beating me,’ Abuchi immediately said in his defence. ‘I had him already and even if that guy did not come I would have knocked him out.’

‘Story. You think you would have beaten that animal?’

Georgina patronized Abuchi with a smile. ‘Abuu dear, don’t worry, I didn’t raise you to be a fighter, you hear. In as much as I admire your fighting for me, don’t ever do it again.’

‘Don’t you know that your going on to fight with him got me even more terrified?’

‘He is dangerous; something could have gone wrong.’ Georgina turned to April. ‘Can we go and see Loveth now please?’

Loveth finally woke up at around 2 p.m., when Gloria had brought Georgina food and left.

She kept muttering only one phrase: ‘I saw her.’

‘Who did you see?’ Georgina asked.

‘I saw her. I really did. You two must believe me.’

‘We believe you, but who did you see?’ April said again.

Loveth turned gently away and would not say anything else.

They tried to press her but the nurse in the ward stopped them and asked them to leave the room.

Gloria returned later in the evening to pay the hospital bills and take Georgina home.

When Georgina told her about Loveth she offered to go with her to see her.

And this was the beginning of the revelation.

Because, like Loveth, the one other person that has encountered this mysterious woman before is Gloria—that period Georgina recently woke up from her drugged sleep.