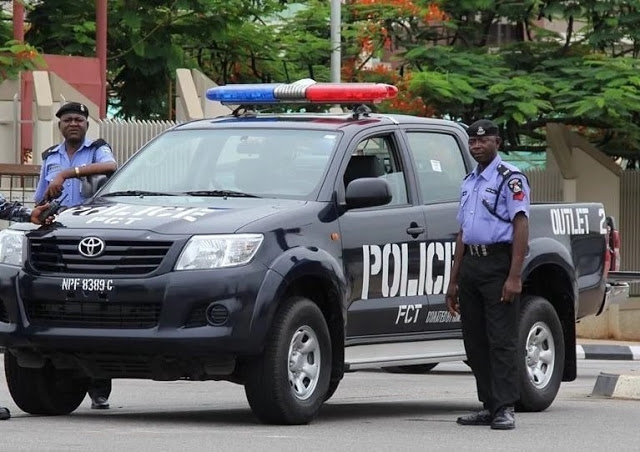 It was past 2 p.m. on Monday and I was at Zenith Bank Okota Branch to submit a document prepared on my company’s letterhead.

I was asked to edit a part of it and resubmit. Because I wanted to conclude the transaction same day, I had to go look for a business center around to type in the edit.

Across the bank was one and, as I walked towards it, a young, scruffy-looking man accosted me.

He said he was a police officer and that his superiors wanted to see me inside a bus waiting around.

He was slightly bearded and on mufti, so I was skeptical. I asked for his ID card and he unhooked it from his waist and showed me.

The prints on the card were tiny and blurred, so I reached out to collect it and read properly.

“So you want to snatch my ID card?!” he screamed at me.

He took from me the envelope I was carrying. It was branded with my company’s name, PLANEX, and contained plain letterheads and other documents.

He started towards the bus, asking me to come along. Right away I made a call to my brother, Ekene Okoro, and briefed him on what was going on.

By the time I got to the bus, the story had changed and I was now being accused of snatching the police officer’s ID card from him.

They were about seven armed men, and one of them started interrogating me.

Why did I choose to use this branch of Zenith Bank instead of the one close to my office in Ikoyi?

Where is the other director of PLANEX?

Why was the document I was to edit not stamped with my company stamp?

Dismissing all my answers, he said they would take me to my office in Ikoyi to confirm.

That he knew people on that street and had just spoken to them, and they couldn’t identify me.

“Speak to my office landlady,” I said.

At that point I stepped aside and called the Lagos Police PRO and narrated my experience to him.

He asked me to pass on the phone to them and they took the phone from me, cut the call, and seized the phone.

I became scared and started inviting passers-by into the argument.

One man intervened and begged them a lot and they calmed down, though insisting that they would still take me away anyway.

Then they asked to search my car, parked outside the bank premises and I let them.

Finding nothing, they took my ID card and demanded my car key and car documents. I had to corner their leader to a side and beg him, telling him that he was like a father to me and should appeal to his men.

At this point his men were almost going violent but he kept calming them down.

He told me to go and arrange some money and I told him I needed my phone to transfer money from the corporate account to my ATM account. I needed the car key too to get the ATM card.

On my way to the ATM, the one who arrested me asked me how much I was going to withdraw. I told him N5,000 and he flared up.

When I called the PPRO at the ATM, he instructed me not to give them any money, promising to send down a team of police officers.

I withdrew some money and ran into the banking hall instead.

I went straight to the bank toilet and hid, before posting my ordeal on Facebook.

My phone’s battery was on 2 per cent at the time and I needed to save it, in case the rescue came.

I sat there in the toilet for close to two hours.

By past 4 p.m., I feared the bank would soon close and called the PPRO again, who assured me his men were on their way.

He asked me to put the CSO of the Branch on the line for him, since his men were being held up on the way.

They spoke and he asked the CSO to put the bank mobile police unit on the line too for him to instruct them on what to do.

But before the bank’s policeman could come speak to the PPRO on phone, the phone battery had gone flat.

I narrated everything to the bank policeman. But he was skeptical, saying if I did nothing, SARS would not be after me.

I learnt from the CSO that the SARS people actually came inside the bank to look for me while I was still in the toilet, claiming to want to return my documents.

The bank policeman now said I should leave the bank, that the bank was not the place for people to hide. So he eased me out of the bank and, outside where my car was parked, I noticed the number plates had been taken away.

The SARS bus was no longer around so I assumed they had left.

When I got into my car and plugged the phone to reach people, the SARS bus came from nowhere and double-crossed my car.

I turned swiftly facing the bank gate and blocking it, hooting crazily to draw attention and for the bank security to let me in.

The bank security, on the order of their skeptical policeman, refused me entry, leaving me out for SARS to devour.

It is a branch I have frequented for over 10 years, visiting there almost every week.

The SARS people jumped out of their bus and started banging on my car windows.

One attempted to puncture the tyre but that superior asked him not to. My phone was still yet to come on, heightening my fear.

It was the longest moment of my life, as I was surrounded by 7 armed policemen who had patiently waited for me for over 2 hours.

They ordered me to wind down but I wouldn’t and a crowd began to gather.

They stepped aside, speaking to the bank policeman now.

The bank policeman later came to me and asked me to wind down, that he had spoken to them, and that I should leave even outside the bank premises where all this was happening.

The management had asked him to chase me away, he said, adding that the bank was not the place for me.

Shouting through shut windows, I pleaded with him to let my phone come on so help could reach me.

He threatened to use force on me if I didn’t leave that very minute. I steered out of the gate and parked in the outside parking lot, still locked up in the car.

Despite every effort to run away from them, they always blocked me, asking me to wind down.

One of the officers was now very impatient and wanted to smash the glass of my car.

Their superior who had been soft all along got angry too and dumped the number plates and documents on the car bonnet and stormed out.

The others followed him, entered their bus, and they drove ahead and waited.

I was scared that they were still waiting along the same road I was to take, so I remained in the car.

The bank policeman came back again, fuming, banging on the car and urging me to leave.

At that point my phone had come on. The PPRO and his deputy called respectively.

For the next hour they all kept calling and checking up on me.

Even the Lagos SARS commandant called, apologetic. They all rose to the challenge and began to look for the erring officers.

The response on social media had been overwhelming, from colleagues, friends and family. I was in shock. Still in shock: I have read stories of SARS tracing people home in the night and killing them and a part of me is worried.

Later at night I learnt the SARS team had been identified and would be arrested today. Does that eclipse the possibility of a retaliation?

It is not a country to die for, I know. But I recognize that one is not protected by silence. Nor is there protection in the incubus of fear, in a cowardly surrender to the prosperity of evil.

Giving them the money they asked for could perhaps have been an alternative to the current anxiety, but ransom guarantees nothing, except temporary relief. In my evolution as a journalist, writer and, above all, a human being for whom slavery is not, I would be ashamed of myself funding evil to walk free.

Yet I’m neither courageous nor smart. I am, in the main, merely lucky. Lucky for social media, for the goodwill and love of family, friends and strangers alike, for all of you who stood for me.

Lucky for the higher echelon of the Nigerian police—the PPRO, his deputy, the commissioner, Lagos SARS commandant—professionals who, without any meaningful leads, fished out the erring officers in hours.

I am grateful to all of you, even as I remain fearless in my advocacy for a decent nation-space.

Mr Immanuel Ibe-Anyanwu is a Nigerian writer and businessman.

Since sharing his ordeal, the Lagos State Police said the state commissioner of police, Edgal Imohimi, had ordered the arrest and trial of the officers.

A statement by Chike Oti, the police spokesperson, said the corrupt police officers ran away when they saw the X-Squad personnel of the Lagos command.

The statement said, “On sighting the X- Squad personnel of the command, the erring policemen hurriedly left the scene in a manner suggestive that they were on an illegal duty.

“The Lagos State commissioner of police directed the Officer-in -Charge of the X- Squad Section to fish out the policemen within two hours. That directive was actualised with the identification of the policemen involved.

“They were led in that inglorious duty by one Inspector Jude Akhoyemta, attached to FSARS Ikeja. The Commissioner has ordered their arrest and as soon as that is done, the public will be notified.”
Share this post with your friends: