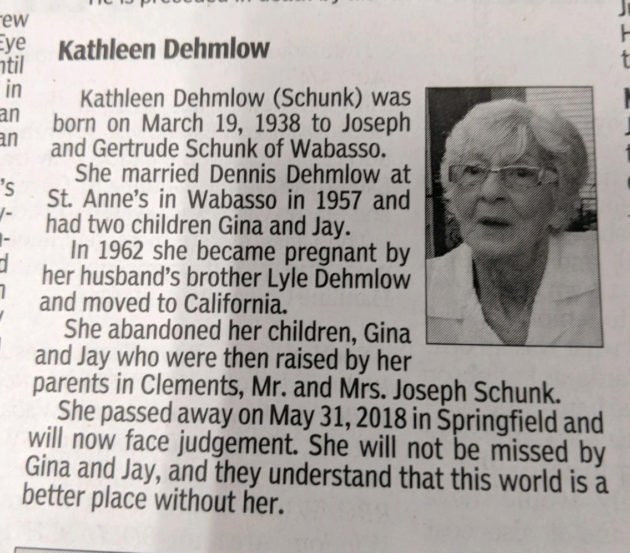 Usually, obituaries are seen as an avenue to pour encomiums to the deceased and say all the best things possible about them, even when some of these things might not be true.

But what happens when a family decides to go out of the normal and turn their relative’s obituary to a means of airing long-held grudges?

The latter was the case in June 2018, when Kathleen Dehmlow passed away at the age of 80 in Springfield, Minnesota.

A few days later, the Redwood Falls Gazette published a death notice that raised many eyebrows when it was shared online.

According to that obituary, after marrying in Minnesota in 1957, Kathleen bore two children named Gina and Jay. But in 1962 she became pregnant by her brother-in-law and moved to California, abandoning her two children in the process and leaving them to be raised by her own parents:

“She will not be missed by Gina and Jay,” the obituary concluded, as “they understand that this world will be a better place without her.”

Due to some negative reactions, the newspaper decided to take down the online version of the obituary (which had been paid for by the family) the day after it was published.