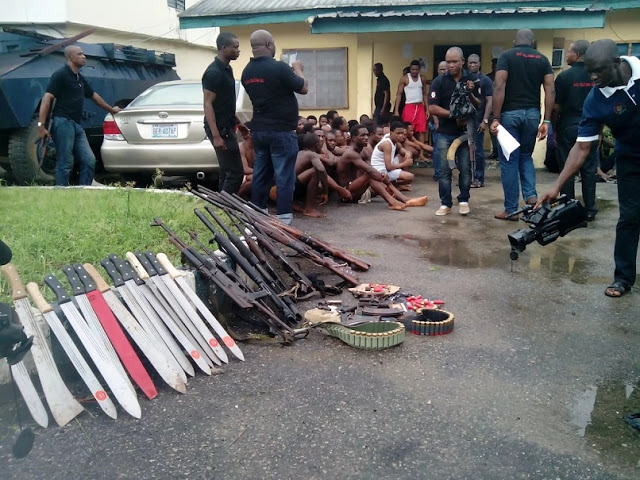 Though security in the state has been beefed up in recent times, pointers still exist to show a lot still needs to be done.

In fact, Lagos was recently ranked the most dangerous city to live in in the world by The Economist Intelligence Unit (EIU).

According to the National Bureau of Statistics, Lagos State and Abuja FCT reported the highest rate of crimes in 2016!

Here are eight of the most common crimes that happen in Lagos:
8. Pick-pocketing

This is one of Lagos city’s more prominent crimes. Places like Oshodi and Isala Eko are notorious for this. In fact, there is a high risk of being a victim of pickpocketing in any major market in Lagos: Balogun Market, Idumota, Aswani, Alaba, and Tejuosho.

Most pickpockets and bag snatchers, if caught, face the horrors of jungle justice. They are nabbed and beaten and in some cases burned alive.

Armed robbery is a serious crime in Lagos. It could happen anywhere but usually more common in the more crowded neighborhoods with weak security.

Most estates in Lagos have their own personalized security system and so rarely experience robberies. Fortunately, the security agencies are steadily devising efficient strategies to deal with armed bandits.

Impersonation is a criminal offense where a person uses someone else’s name and identity to scam or cause harm to other people. Some criminal-minded Lagosians impersonate security officials or professional people like lawyers and doctors and sometimes even celebrities just to defraud people.

Child abuse is the physical maltreatment or sexual molestation of a child. This ugly crime is sadly very common in Lagos and other major Nigerian cities. Child labor, a common form of child abuse, is pervasive in all states in Nigeria, including Lagos. People bring kids from far villages only to expose them to all kinds of abuse.

This is probably the most common form of cybercrime that occur in Lagos. Online fraud, or internet fraud, is also known as “online 419” in Nigeria.

The origin of “419” is from the number 419 that refers to the section of the Nigerian Criminal Code dealing with fraud, its charges, and penalties for offenders.

There are different kinds of online fraud, including the Nigerian brand of internet fraud called “Yahoo-Yahoo”.

Here is a message from a victim of internet fraud (yahoo boys in Nigeria):

” I made a friend from Facebook just a few days. He claimed to be British. Two days later, he said he was in Lagos, Nigeria, for a local government project. Then the next day he messaged me again, saying he has started the project and that he got robbed in the hotel. He was asking for financial help. He claimed he was offered 24-hour protection from the police to the charge of $1000 per month. Is it common that white people are always targeted in these crimes?

“I wondered why the local govt, the British Embassy, and the local church could not offer him any help? The whole thing seems completely a scam to me. He told me he hurt his hand in the incident, but he wouldn’t stop messaging me and asking for financial help! I seem to be a fool to have fallen for this scam!”

Women are the main victims of rape in Lagos. There are places in Lagos that are not safe for women to be at in odd times. Places like Mushin, Bariga, and Ajegunle are notorious for their high rate of rape and sexual assault crimes.

Nigeria has high rates of kidnapping cases. Anybody can be a victim of kidnapping, but the kidnappers mostly target high-profile individuals. They ambush and hold them hostage while demanding ransom from relatives.

Kidnappers face a jail sentence of up to 20 years when they are caught.

Some parts of Lagos are famous for cult-related crimes. Even political leaders encourage cultism by employing street thugs to do their dirty work during elections.

The Eiye and Badoo (operates in Ikorodu) cult groups are common cult groups in Lagos. Cult clashes are one of the leading causes of death of young people in Nigeria.

Other major common crimes in Lagos include: