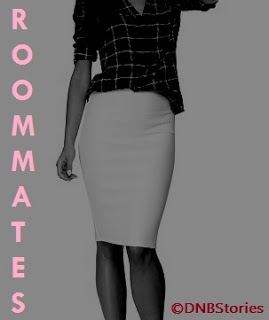 A yellow taxi stopped in front of Four Chefs restaurant.

Georgina got down and paid.

Inside, she turned her eyes left; Mrs Onwa seemed to always be at that table.

Today, too, she was there.

Georgina flipped her hair back and threw off her legs, starting toward the table.

She looked particularly gorgeous in her cream pencil skirt and dark-blue top.

A man at a nearby table stopped talking to stare as she walked by.

Georgina winked at him and sashayed past.

The man finally turned back to his partner, only to meet her scowling eyes.

‘Good afternoon,’ Georgina said as she eased herself into the chair.

‘You are over thirty minutes late,’ Mrs Onwa said instead.

Georgina gave the hint of a smile. ‘I couldn’t find a taxi that was neat enough for me on time.’

‘You should consider getting your own car then.’

Georgina gave the woman a look.

A waiter appeared with the long, brown menu booklet.

Georgina has stretched her hand to collect the booklet when Mrs Onwa waved at the young man and said, ‘Go, we won’t be ordering.’

Georgina’s eyes bulged, her hand frozen in the air.

Finally, she lowered her hand, slowly, as if with effort. ‘We won’t be ordering, why?’ she asked.

‘Well, you can go ahead and order if you want to,’ Mrs Onwa said, ‘so long as the bill is on you. And need I remind you that the cheapest thing you can get here is about N18, 000.’

Georgina frowned at her.

Mrs Onwa pulled a face. ‘Yes. In case you don’t know, I am no longer a rich woman. All thanks to you and your friends, very soon I’d finally cease to be the wife of a millionaire.’

Georgina gave a nonchalant sigh, relaxing back into her seat. ‘What is it you said I needed to know?’

‘I have something very important to say to you, Georgina, but before that I have a more pressing demand from you.’

‘You are going to help me get back with my husband.’

Georgina’s lips curved—smile-like. ‘And how is that possible?’

‘I don’t know. You are Georgina. Everything is possible with you.’

Now Georgina’s unamused smile came out clear. ‘Is this the reason you called me here?’

Georgina picked her purse, rising from the seat.

Georgina looked at her. She hesitated, but finally lowered herself back to the chair.

‘Some weeks before Harry’s accident,’ Mrs Onwa started, ‘there was a situation at the office.’

Georgina stared at her, listening.

‘Something went missing, one of the printers in a vacant office I think, and the Chief Security Officer was indicted for it.’

‘The old man claimed he knew nothing, but when word got to Harry, he discharged him still. He came back to the premises on several occasions, begging and swearing his innocence with whatever god he served, but Harry was too busy to care. The disturbance got to a point that he had him thrown out and never allowed into the office complex again.’

‘Well, it appeared the poor old pa got so heartbroken over the incident and took his own life some days after.’

Mrs Onwa sighed. ‘Yes. Apparently, he had a son who had been trying all he could to get himself employed many years since he left school. After what happened to his father, he became even more broken than he already is.’

‘According to Harry’s assistant, he kept sending threatening messages to him. I think he was making some other demands as well. The same week after his last message, the accident happened.’

‘Are you saying the son of the man who committed suicide might have been responsible?’ Georgina said.

‘Well, I am not entirely sure, but all fingers point to it.’

‘How were you able to gather all these information?’

‘I have my sources. Many times, I tried convincing the man I married to take up the case, but he refused.’

Disbelief fell over Georgina’s eyes. ‘He did not? Why?’

Mrs Onwa joined her hands together on the table. ‘You see, Harry was all my husband had. His death broke him. It sucked out all his energy, his spirit, everything in him. This is why you must help me get back to him. In this state, he can’t be left alone. I won’t forgive myself if anything happens to him now.’

Georgina was quiet, her eyes fixed on the woman.

Mrs Onwa held her hand on the table. ‘Georgina, please, do this for me. My husband is old and weak and broken. He needs all the love and care he can get at this time.’

Georgina took her hand out of the woman’s fingers. She drew in a deep breath and let it out. ‘What else do you know about this wounded son on a mission?’

Mrs Onwa reached into her handbag on the table and brought out a file. She extended it to Georgina. ‘There are photos and some other documents in there, everything that might be of help.’

Georgina collected the folder and looked inside.

She rose. ‘I will see what I can do about your getting back to your husband.’

She turned to leave.

‘You and your friends should be very careful. Remember, the best form of revenge is never to be like the enemy.’

She opened her purse and brought out Mrs Onwa’s phone and extended them to her. ‘Take. I just needed to get your husband’s number.’

Mrs Onwa gave an uncaring wave. ‘You can keep those. Phones are the least on my mind right now.’

Georgina put the phones back into her purse and strutted off.

Loveth opened the door when she knocked.

She burst into the room, throwing off her wig and kicking off her sandals at the same time.

April and Loveth came close to her.

‘It seems we have a new culprit at hand.’

Georgina opened the folder and brought out the pictures in them.

‘Harry fired his father sometime. The old man committed suicide as a result and this person in this photo, his only son, swore revenge. Apparently, he sent Harry threatening messages weeks before the orchestrated accident.’

Loveth’s eyes were fixed on the photo again. ‘I think I know this face,’ she said. ‘I’ve seen it once.’

The girls turned to her.

‘I remember. He was the person that came into the room with the man that later allowed me to go the period I was abducted.’

‘The people paid to torture you?’ April asked.

‘Yes. They worked together.’

April and Georgina were still, staring at their friend.

The door of the bathroom came open then and Nwamgbeke in her towel and damp skin walked out.

Nwamgbeke’s eyes fell on the photos her friends were holding.

She came closer and looked well.

Then she screamed and ran back into the bathroom and bolted the door.

Some minutes later, the girls still stood at the door, knocking and begging her to open.

‘Mgbeke?’ –April this time, ‘please open the door. We are here for you. Nothing will ever happen to you again.’

Many more minutes passed before finally they heard the sound of an unbolting and the door was pulled slowly back.

Mgbeke came out with her face soaked with tears.

‘Mgbeke, what is it?’ Loveth asked.

Nwamgbeke pointed to the picture on the bed. ‘That is him,’ she said.

‘That is the man that kill my husband.’

The girls’ eyes opened to their widest limits.

Far ahead of her, her friends were in the cab waiting.

She walked up and joined them, smiling mischievously.

The girls brought their heads closer to her.

‘The fool fell for it,’ April said. ‘He suggested a private meeting himself.’

Georgina’s lips curved in her signature evil smile. ‘Did he say when?’

Georgina raised her palm to April and she struck it with hers.

‘Driver,’ she said, ‘take us back to where you picked us.’

He started the vehicle and drove off.

At the hostel, they found Abuchi leaning to the railing outside their door.

He’d been waiting for close to an hour.

Loveth came close and gave him a side hug.

April was opening the door now.

Abuchi hissed and threw his face away.

‘What is that?’ Georgina said.

‘What is what?’ Abuchi returned.

Georgina made her own hiss.

‘Ladies, inside, please,’ April said. ‘Do not create a scene.’

Georgina blocked Abuchi as he was about to enter. ‘They said ladies, are you a lady?’

Abuchi carried her up and that way into the room.

Georgina was laughing as he set her down on the bed.

Everybody’s shocked eyes turned to her.

April came back from school with her face full of smiles.

‘What is it?’ Georgina asked.

She was the only one at home at the time.

‘Girl, you are the baddest bitch I know, you know that?’ April said. ‘I’m not a lesbian but I love you!’

Surprised amusement twinkled in Georgina’s eyes. ‘What is it?’ she asked.

‘I saw my paper today, you aced the quiz!’

Georgina smiled. ‘You should thank that boy they call MCB Course Rep.’

April looked surprised. ‘Oscar helped you, that’s unheard of. That boy behaves so childish you’d wonder if he is up to 18 years old.’

‘But he is intelligent.’

‘Yea, he is. Heard he makes straight A’s in their department. So how were you able to get anything from him?’

‘Oh dear,’ Georgina said, ‘you may have all the fine face and charming eyes and Naomi Campbell’s legs, but what really gets the job done are the boobs!’ Georgina tapped at her chest.

‘How many departments wrote that test sef?’ Georgina asked. ‘The class was so large.’

‘Just three. But it is our course.’

‘Where is Loveth and Mgbeke?’

‘They went to buy food.’

‘Call them back,’ April said. ‘I’m taking you poor girls out right now.’

Georgina grinned. ‘I’ll answer you as soon as the food is safe in my stomach.’

‘Of course,’ April said. ‘The queen can always change her mind anytime.’

Georgina was smiling and shaking her head as she dialled Loveth’s number.

They all were still at Fruit and Berries, eating when Chuka’s call came in.