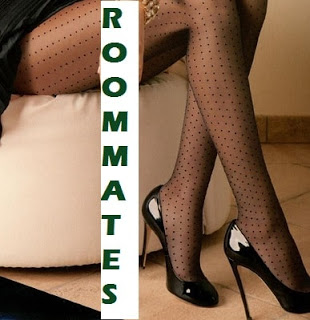 ‘Who is giving me shoe na?’ Nwamgbeke said again.

Again, none of her roommates behaved as though they’d heard her.

All of them were busy, concealing, highlighting, blending, shadowing, fixing and finishing.

All the while they worked on their faces, April reminded them: ‘Eyes, ladies, eyes! Your miracle is in your eyes!’

‘Oh please!’ Georgina said to her. ‘Your miracle is not my miracle!’

‘Somebody give me shoe o!’ Nwamgbeke screamed.

Now Georgina turned to her, and then she screamed. ‘Oh my God!’

April and Loveth looked, and then they screamed too.

Loveth clutched her chest, battling to bring back her breathing to normal.

Nwamgbeke did not understand the reason for their shock.

‘What did you rub on your lips?’ April asked.

‘The thing you give me na,’ Nwamgbeke said. ‘Mascata.’

April’s lips opened to their widest limits. ‘You rubbed mascara on your lips?’

‘Where I suppose rubbing it before?’

‘Did you finish the entire shadow palette on your eyes?’ Loveth asked.

‘Is it not Georgina that telling me to rubbing it there?’

‘Blood of God!’ Loveth said. She grabbed the pack of cleansing pads, picked a handful and threw at Nwamgbeke. ‘Start wiping!’

Surprise came on Nwamgbeke’s face. ‘I should wiping it?’

‘I should wiping everything?’

Loveth gave her a mean frown and she took the pads and started to wipe her face.

Finally April was done. She came over to Nwamgbeke, took a pad and wiped off all the smudges on her face.

Slowly and diligently, she reapplied her makeup the right way.

Nwamgbeke looked into the mirror and her lips burst open. ‘Is this me?’ she asked.

Georgina shook her head. ‘No, it is not you. Bingo!’

Georgina turned to April. ‘April, are you really sure it’s a good idea for this girl to go with us?’

April gave a small shrug. ‘Why not?’ she said. ‘She is a little unpolished, and so what? Who isn’t?’

‘I having polish in my bag if you needing it o,’ Nwamgbeke said.

This time Loveth did not laugh. She just quietly walked to the chair, sat and crossed her legs, looking on as if exhausted.

Georgina had a similar look on her face too.

April turned to Nwamgbeke. ‘Now listen, young lady,’ she said, ‘we have worked so hard to create a unique magic to our existence. You must try your most possible best to fit into that magic otherwise, you’ll always remain at the back!’

Nwamgbeke nodded. ‘Solly,’ she said. ‘I following the magic now.’

Finally the girls were ready and each mounted her heels and suddenly became inches taller.

Georgina turned sharply to her. ‘The pair of shoes I gave you yesterday, where is it?’

‘And what happened to the heels?’

‘Is not me that breaking it o!’

Nwamgbeke looked at April and she flicked her a frown.

‘Ok,’ Georgina said. ‘I have no other shoes to give to you.’

April walked to the corner where all her shoes were arranged in a line like school children at the assembly ground and bent and picked a pair.

She handed them to Nwamgbeke.

‘Thank you,’ Nwamgbeke said, collecting the shoes from her.

And then she saw the height of the heels and her face crumpled again. ‘Hey,’ she cried out.

But, quite surprisingly, she stood fairly well on the shoes and when she walked, it was not something too scary anymore.

‘Shall we go?’ Loveth said.

Loveth looked at the clock on the wall. ‘Almost eleven.’

Georgina waved. ‘Oh please, that time is for floor people.’

‘You, your own problem is poverty,’ Georgina said.

‘Oh please, are you richer than me?’ Loveth said.

Georgina turned to her with a funny smirk. ‘Did you just ask that?’

‘Yes, I just did,’ Loveth said. ‘At least whatever you see on me I got with my own money.’

‘Oh really?’ Georgina said. She reached and pulled off Loveth’s wig. ‘In case you’ve forgotten this belongs to me!’

Nwamgbeke threw her mouth open and staggered in great laughter.

April started to smile too.

‘Georgina, please giving her back the wig, inu,’ Nwamgbeke said. ‘Let us not dream bad dream this night.’

A tiny smile popped out of Georgina’s face. She extended the wig back to Loveth. ‘Take jor.’

Loveth collected the wig back from her with a frown.

Nwamgbeke turned quiet at once.

And the girls stepped out, dazzling in their fitted gowns and full wigs, their faces shining from well applied makeup and height hoisted on clacking high heels.

At the gate of the hotel, their IV’s were perforated and they sashayed in.

Fancy gold-plated chairs were arranged round the wide, rectangular pool. The water shimmered blue and gold.

Soft music played in the background.

About three girls in bikini were inside the pool with two shirtless guys.

Loveth leaned to Georgina and asked. ‘Are we swimming?’

She led the way up to the entrance. Inside, they turned to the spot where cocktails were served.

They each picked a glass.

The man in white and black serving the cocktails smiled at Georgina. ‘Hey, pretty,’ he said.

‘Face your work!’ Georgina threw back at him.

She gestured to her friends and they gathered round her. ‘Ladies,’ she called, ‘this is the moment of our dispersal. I release you now to go into the world and explore.’ She turned to April and Loveth. ‘I’ll call you as soon as I’ve caught the fish.’

Georgina held her straw and pulled it a little out of her mouth. ‘You sip and not slurp!’

‘But the stlaw is tiny na?’

‘That’s because you are meant to take your drink in very small sips.’

Georgina waved. ‘Oya, off you go!’

And with that they dispersed.

Nwamgbeke raised her eyes up from her cup.

‘Hellos,’ she returned to the tall dark man greeting her.

‘I’ve been watching you for quite a while and I must say you look stunning tonight.’

Nwamgbeke smiled. ‘Thank you,’ she said. ‘You haven’t seen anything yet.’

Nwamgbeke gave another smile. ‘No, what I meaning is that I look better in person.’

The smile on the man’s face vanished. ‘This is not you?’

‘This is me,’ Nwamgbeke said. ‘Is my fliend that paint me like this.’ Her teeth showed in a smile. ‘She use me do artist.’

The man bent closer as if to hear her well. ‘What?’

Nwamgbeke rolled her eyes up, trying to remember the name Georgina had given her.

The man stared at her, waiting.

Finally Nwamgbeke turned to him and said, ‘I not lemember it again o.’

The man appeared amused. ‘What? You can’t remember your name?’

Nwamgbeke hissed and shook her head. ‘Is not it.’

The man shrugged. ‘Well, since you can’t remember, can I call you Miss Bee then?’

Nwamgbeke shook her head. ‘Bee is anwu [honeybee] na,’ she said. ‘Prease finding something else.’

Nwamgbeke shook her head again. ‘I from Ichida, anything that start with K is not good. Ask Kate K-leg and she will tell you.’

The man smiled. ‘You sound really funny, I like it.’

The man nodded with his cheeks depressed.

‘That is just me o,’ Nwamgbeke said. ‘I just doing it for you flee, for other people I charge.’

‘Oh, ok, so are you like a comedienne or something?’

‘No, not comedian. Just laughter seller.’

The man smiled again. ‘I see.’

‘So how much do you charge per night?’

Nwamgbeke scratched the top of her shoulder. ‘You wanting me to telling you my plice?’

‘Sure. If it is affordable, I’ll pay and have you entertain me for the night.’

The man shrugged in affirmation.

‘Okay na. I charge you according to how you laugh.’

‘Yes. If you do ha-ha-ha, that is just ten thousand. Ha-ha-ha-ha-ha is twenty thousand. Then if you begin do that one that they do ki-ki-ki-ki, like nkakwu [rat], that one is thirty thousand.’

‘Hmm,’ the man said. He sipped a bit of his wine. ‘I must admit your packages are quite expensive.’

‘It too cost?’ Nwamgbeke asked.