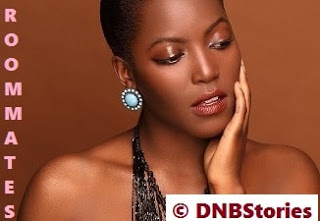 She was on the plastic chair, eyes fixed into the open Oxford Advanced Learner’s Dictionary on the table before her.

April looked at her again. ‘What word is that?’ she asked.

‘I knowing it before,’ Nwamgbeke said, her eyes not leaving the dictionary.

Finally Nwamgbeke stood and walked to the bed with the dictionary.

April collected it from her and looked. ‘Which one?’ she asked.

Nwamgbeke bent and pointed at the word.

‘Yes!’ Nwamgbeke screamed. ‘I saying I knowing it before. Kolo…kolo…koloko—’ she started to stammer again.

April looked at her and shook her head. She gave the dictionary back to her.

Loveth was in the kitchen, doing the dishes and singing on top of her voice.

Earlier on, Nwamgbeke had swept the entire rooms and April washed the bathroom.

Georgina did nothing before going out.

As she washed the plates, Loveth turned and twisted her body to the chaotic rhythm of her song—Beyonce’s Who Run The World.

She sang louder to part of the lyrics she knew and used a hum for those she didn’t.

Nwamgbeke dropped the dictionary on the table and stood. ‘I fetching her for you,’ she said.

April gave her a look and said ‘Thank you’ quietly.

Loveth came out of the kitchen with Nwamgbeke.

‘You called me?’ she said, rubbing her wet hands on her belly.

‘Na today?’ Nwamgbeke replied, taking her seat and carrying back her dictionary.

Loveth turned and glanced at her then turned back to April.

‘What is the matter?’ Loveth asked.

Loveth quickly joined her on the bed.

April dropped her phone aside. ‘I may not be graduating with my mates this year,’ she muttered.

Loveth’s brows came suddenly together. ‘Why?’

‘Really? Even after hearing the story of how you spent months in a hospital and almost died?’

April nodded. ‘He is the co-ordinator now. He has declined all my plea.’

‘Have you told your mum?’

‘Yes. She had to call him personally on Friday yet he refused.’

‘He just wants to see me punished. Whatever for I don’t know.’

‘Of course, have you forgotten that little incident during your second year? The fool obviously had kept on to it.’

April smiled, but not from amusement. ‘Well, it’s just a year. I’ll catch up.’

Loveth said nothing else, just staring at her roommate and hating the fact that there is nothing she could do.

Nwamgbeke turned to them. ‘Giving me the number of that man,’ she said.

April’s eyes moved to her, but there wasn’t much understanding in them. ‘What?’

‘Giving me the Njoku number,’ Nwamgbeke said again. ‘Abi you not having it?’

‘And what do you need it for?’ Loveth asked.

April was slow to act.

Loveth stared on for a while and then gave April an urging nod.

Slowly, April reached to her phone. She scrolled down her contact list and stopped at the name—Professor Njoku.

She extended the phone to Nwamgbeke.

Nwamgbeke collected the phone and copied the number into her own phone.

She sent the call off and put the phone to her ear and waited.

The call was not answered.

She dialled the number again.

‘I talking to Mr Njoku lecturer?’

‘You need come my husband shrine in seven days. Person bling your picture here say you disturbing him daughter.’

‘What are you talking about?’

She cut the call.

April and Loveth were staring, eyes and lips wide open.

‘I done do am,’ Nwamgbeke said, smiling.

Soon Nwamgbeke’s phone began to ring. She checked and saw that it was the Professor’s number.

She dropped the phone and started to laugh.

On Monday afternoon, the boy who was 200-Level course rep in April’s department came into their class with April’s IT booklet.

He walked to her desk and told her Prof asked him to give it to her.

April opened the booklet and saw that it has finally been marked.

She started to smile.

She gave one each to April and Loveth but none to Nwamgbeke.

Nwamgbeke stared at her. ‘You not giving me?’ she asked.

‘Not until you pass my lessons,’ Georgina said.

‘What resson are you talking about?’

Nwamgbeke looked over herself. ‘What you mean?’ she asked, turning back to Georgina.

‘You have 2 days, my dear, to prove to me that you are worthy of going anywhere with us.’

‘Your lessons start tomorrow and I’ll be your sole tutor,’ Georgina said.

She smiled a threatening smile. ‘And, my dear—’ Her voice and face changed. ‘–you better not fail because in my class, fail one is fail all.’

She turned to April and Loveth. ‘And for you both senior students, shopping is on Friday.’

She walked into the bathroom.

Nwamgbeke turned to April with a wondering face. ‘You suring this girl getting sense at all?’

April smiled. ‘I doubt it.’

Nwamgbeke turned to Loveth. ‘Sister Roveth, you not hear what I talk?’

‘You suring Georgina getting sense at all?’

‘Ask her when she comes out,’ Loveth said.

Loveth smiled. ‘Good girl! While at it, remember to remind her that we have shared all the work we do in this house and the portion she gets.’

Nwamgbeke hissed, face full off approval. ‘Take five, jare!’ She and Loveth slammed their palms together.

The door of the bathroom burst open then and Georgina came out.

Georgina gestured with a finger. ‘Sit!’ she said.

Nwamgbeke reluctantly walked to the chair and sat.

‘First of all, your name from today onwards is Becky.’

April and Loveth sat on the bed, watching.

Georgina put up her hand. ‘There is no space for questions in my class.’

Nwamgbeke said nothing again, only staring.

‘When a guy walks up to you and say hi, what do you say?’ Georgina continued.

‘Oho, I have hear,’ Nwamgbeke said.

‘If he asks for your name, what do you say?’

‘If he asks for your number?’

‘I tell him I not cally my phone come.’

‘They are disturbing us,’ Nwamgbeke reported.

‘So what do you say when a guy asks for your number?’

‘I ask him whether he buying any phone for me.’

Georgina slapped her head. ‘You ask him, very quietly and courteously, “And why should I do that?”’

‘Now what if he is coming too close to you?’

‘Good. You can push him gently and tell him you’d prefer not to be encased.’

‘I said ‘encased’. Moving on, remember, you are free to be arrogant but not rude. You have to distribute your attitude in acceptable packages.’

‘Shut up!’ Georgina barked. ‘I’m talking about your attitude.’

‘Smile only by curving your lips slightly and bending your eyes away.’

Georgina demonstrated and then asked Nwamgbeke to do it.

Nwamgbeke twisted her mouth to one side and closed her eyes.

April and Loveth burst into laughter.

Georgina shook her head and sighed in defeat.

‘Now,’ Georgina continued, ‘this part is quite important. If he keeps on trying to be funny, tell him you’ve heard enough and would like to use the restroom. And then you walk away and make sure he watches you do that. You should try and walk away from at least five men before the end of the party. At the end, you will only give out your number to the ones that came back, do you understand?’

‘Ha,’ Nwamgbeke said. ‘This is just ordinary how to do shakara na. I knowing shakara well before na. Asking Ikechukwu and he will tell you.’

‘Who is Ikechukwu?’ Georgina asked.

‘Are you married?’ April asked.

‘So where is your husband now and what does he do?’ Loveth joined.

The girls’ eyes were fixed on her.

‘They have kill him,’ Nwamgbeke said at last.

Loveth sprang up from the bed. ‘Oh my God, what happened?’

‘His friend kill him.’ She stroked off a line of tear from her face and stood.

She walked to her bag and brought out a picture—the image of Ikechukwu clad in a grey suit, cute and smiling.

She showed it to them.

Georgina grabbed the picture from Nwamgbeke at once. ‘Where did you get this?!’