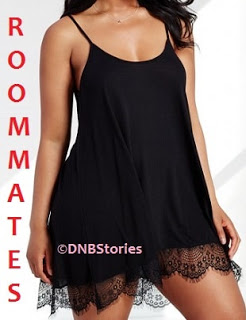 ‘I already told you I don’t have!’ April shouted.

‘How can you say you don’t have when your mother is a professor?’

April fixed the tiny nail polish brush back in place and turned a crumpled face to Loveth. ‘First, my mother is not a professor, she is a reader. Secondly, I already told you she’d rather spend all her money trying to get published in one journal or the other than give me a cent of it. Ask Georgina and see if she can lend you.’

Georgina threw one lump of boiled yam into her mouth and slurped her sauce-stained fingers. ‘What?’ she said. ‘I heard my name just now, what is it?’

‘Mr Okeruoha asked me to bring it or else he will sleep with me.’

‘Oh, the lecturer that was assigned to you?’

‘The one you said is young and cute?’

‘He wants to sleep with you?’

‘He failed me in the last quiz we had.’

‘Are you giving me the money or not?’

‘So after sleeping with you, you will pay him too? As per thank offering things or what?’

‘No! He said I either bring the money or he will sleep with me.’

‘So?’ Georgina said. ‘What are you still waiting for? Pick the cheaper option at once na!’

‘Georgina!’ April screamed, picking the pillow at once and wanting to strike Georgina.

Georgina dodged. ‘What?! Maybe you don’t know, those guys are well paid and since you are already in your final year, you can even get pregnant for him in the process and he will marry you and all your life struggles will be over! After all, you once admitted you like him, didn’t you?’

‘It is you that will marry a lecturer, idiot!’ Loveth said.

‘Please borrow me the money if you can and stop talking nonsense!’

‘Where will I get? Abi this thing wey dey happen for this country now you no dey hear am?’

‘You are always saying you don’t have money yet you inherited a mega property from your late sister’s husband!’

‘Monitoring spirit, keep up the work, you hear! Shebi you know the location of the house, go there and scrape some paint off the wall and sell na!’

‘I think you should report that lecturer immediately,’ April said.

‘Report him?’ Georgina was looking at April with a sorry face. ‘To who?’

‘The head of department, or dean of faculty or something.’

‘Story for the gods!’ Georgina said. ‘So after she reports him, what will now happen?’

‘He will be suitably sanctioned and you won’t get to pay him for anything!’

‘April, I don’t know what is wrong with you o,’ Georgina said. ‘Seriously since this our final year you’ve been behaving as if you are no longer in Nigeria. A young lecturer that our beloved sister here even admitted is tall and cute wants to sleep with her and you advise her to carry herself to the HOD who obviously will be much older and potbellied and will still demand the same thing from her?’

‘So what else would you advise she did?’

‘I warned Loveth, I warned her!’ Georgina cried. ‘This is your final year, last semester for that matter, avoid anything that will bring you face to face with any of these corrupt lecturers. Identify them and avoid them like plague. If they fix lectures by midnight, attend. If they demand you buy their handwritten textbook, buy immediately! If they ask to sit on top of you while teaching in the class, allow them. So that you will pass and go. I get power o, but e no reach where lecturer dey!’

‘So what should I do now?’ Loveth said.

‘Go and beg him o,’ Georgina said. ‘Nwamgbeke is no longer here to threaten him with juju on your behalf!’

‘That thing won’t even work on him sef,’ Loveth said. ‘The man is an atheist.’

‘Are you sure of what you are saying?’ April asked.

‘But atheist lecturers are usually the most principled, I’m appalled at this embarrassing conduct of his. Maybe he is just joking with you.’

Georgina pulled a face. ‘Stay there and be speaking grammar, you did not hear 20K or take off your clothes?’

The door opened then and Philomena walked in.

She wore a short flower gown that stopped at her thighs.

But for her attractive brown skin, many would have considered the dress offensive.

Georgina took the wrapper and covered her exposed legs.

April looked at her but said nothing.

‘What are you carrying?’ April asked, turning back to Philomena.

Without another word April grabbed the fancy poly bag from Philomena.

‘Loveth, why are you looking so sad?’ Philomena asked.

‘Don’t mind her, she needs money!’ Georgina threw in.

‘How much and what for?’

‘To buy a lecturer?’

‘Isn’t that rather too much for a textbook?’

‘My dear, that’s the tragedy of being a student in this school.’

‘Anyways, cheer up, Loveth, I will give you the money.’

Georgina’s eyes became wide. ‘You will?’

‘Yeap,’ Philomena said. She walked past and sat on the edge of the dwarf fridge by the wall.

‘Thanks, but I don’t need your money!’ Loveth said.

Without allowing their surprise to fully settle, she stood and stormed off into the kitchen.

April turned to look at Georgina with shocked eyes.

‘What is wrong with her?’ Philomena managed to ask.

No response came from any of the girls.

Georgina shifted and snatched the cup of ice cream from her. ‘Tyra Banks abi Naomi Campbell, you are licking ice cream abi? No wonder your modelling career just died like burnt paper.’

‘You are a very stupid girl, Georgina!’ April said.

Georgina only hummed something as she threw a big scoop of ice cream into her mouth.

Philomena stood and followed Loveth into the kitchen.

‘Georgina, that’s enough,’ April said, ‘hand it back.’ She made to carry the ice cream but Georgina shifted.

‘You will lick ice cream and they will give my sister 20K,’ Georgina murmured, ‘yet in the night I will be the one they will touch, mbanu!’

‘You should ask yourself why lesbians always want to sleep with you!’ April said.

Georgina’s face turned mournful. ‘My sister, I don’t know o. Look at me na, as I like man reach still lee-lee people will not allow me to rest. Very soon you will hear that Chichi Igbu is looking for me too.’

‘Please I did not say anything.’ Georgina threw another scoop of ice cream into her mouth.

Inside the kitchen, Loveth took the custard container half filled with garri and poured some in a plate.

She added milk, dropped in two cubes of sugar and added water.

Philomena was watching her.

‘What was that?’ she asked Loveth.

‘What was what?’ Loveth gave her back.

Loveth only hissed and went about mixing her garri concoction.

She was leaving the kitchen and humming to the sweet taste of her food when Philomena drew her back, slightly, by the arm.

On impulse, Loveth poured the whole content of her plate on her.

On impulse too, Philomena threw a searing slap to her cheek.

Outside the kitchen, April and Georgina sprang up from the bed.

But while April was rushing toward the kitchen, Georgina made her way to the outside door instead, both her hands shielding her head.

Nothing came from either of the two quarrelling girls.

Then the strangest thing happened.

Loveth’s face crumpled and she started to cry.

April turned to Philomena immediately. ‘What did you do to her?’

Philomena’s lips came open, some remorse settling on her. ‘Nothing, I…I just…’ she stuttered.

She turned to Loveth and said, ‘I’m sorry, Loveth, I didn’t mean to slap you like that.’

‘Mr Okeruoha called me dumb in class today and everybody laughed at me!’ Loveth cried instead.

‘Who is Mr Okeruoha?’ Philomena asked.

‘He is the same man that is demanding to sleep with you, right?’ April said.

‘Yes. The man is just tormenting me. He is such a wicked man!’

April wrapped her arms around Loveth, consoling her.

‘Your lecturer called you dumb and you are crying for him?’ Philomena said.

‘What am I supposed to do? He is my project supervisor. Of all the three project topics I’ve submitted, he approved none! And now he failed me in the last quiz we had. The man just hates me, I don’t know what I did to him!’

Philomena drew closer and held Loveth. ‘No tears, babe. I went through worse during my time. I will tell you crying is not the solution. Come, we’ll prove your lecturer wrong!’

Loveth looked up at Philomena and eventually gave a slow nod.

Georgina opened the door and walked in.

All the girls’ eyes were turned up at her.

‘What?’ Georgina said, staring back at them.

‘Where did you go to?’ April spoke first.

‘I thought I heard the sound of someone breaking bottle and I ran for cover.’

Loveth wiped at her eyes one more time.

‘Have you been crying?’ Georgina asked.

Loveth made a cluck, face swollen.

Georgina dropped to the bed and held Loveth. ‘What’s the matter?’

‘A lecturer called her dumb at school.’ It was Philomena that answered.

‘Is that why you are crying?’ Georgina said.

‘Why shouldn’t I cry?’ Loveth said.

‘Why should you cry?’ Georgina returned.

‘What if he is right? He said at my age he’d already started lecturing. That all my course mates are better than me.’

‘Taa!’ Georgina barked. ‘Look here, girlfriend, let me tell you, “Never you ever believe someone’s life is better than yours. Never! We are all in this shit together, it’s the same struggle for that ultimate satisfaction for everyone, which no one actually ever gets!”’

‘Nobody is living a complete life, my dear. Not a single soul. Life can never be lived completely, but you can choose to always create your own paradise from the little you have. Forget money, fame, intelligence or success, we all just want to be happy.’

Everyone was looking at Georgina now.

‘I’m not a lesbian—[she glanced at Philomena]—or a bi, but I’m going to do this now.’

Georgina bent and kissed Loveth on the forehead. ‘Now stand up, dear, and let no sad person steal your precious joy from you ever again.’

Later that same evening, April was coming back to the lodge with the black poly bag containing banana, carrots and cucumber she bought from a woman selling fruits by the roadside when someone called her name from behind.

She turned and on seeing who the person that had called was, dropped the fruits she bought in shock!

At about that same time in the lodge, Philomena received a call.

In the kitchen, Loveth dropped the knife she was holding and screamed.

And Georgina fell in the bathroom!