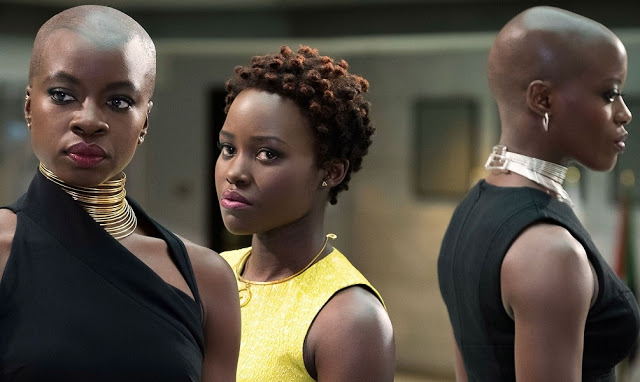 Black Panther! What a movie.

When I got the ticket to go see it (yes, writers at DNB Stories are often given tickets to go see a movie so that we could write about it), I said to myself: “Walk into the theatre as just any film lover, forget about writing or critiquing or anything and enjoy the movie first.”

But as much as I tried to just enjoy the film and not think too deeply about anything, I couldn’t.

The very deep political messages were everywhere, in every scene.

Not that I had expected anything different, but I hadn’t thought that just one film could have touched so many real world issues that easily.

From immigration, gender politics and race, everything was well represented.

Reminded me so much of Daniel Nkado’s Greenland.

Now one very important theme of the film, one that has gone on to become one of the most talked-about aspects of the film is Erik Killmonger’s position in Wakanda.

Killmonger (rightly played by Michael B. Jordan) in his style of moving Wakanda forward as king, vows to use Wakanda’s advanced weapons to arm oppressed black peoples all over the world.

Some people found Killmonger’s aims to be noble and that his killing in Black Panther turned the movie to an “overt propaganda against revolutionary politics.”

Since the film was released, the hashtag #KillmongerWasRight has surfaced online and many people have taken to Twitter to defend him, as they felt he was wronged by the Wakandans, who turned their back on him.

So the big Black Panther question has turned out to be:

“Who really is right?”

Some have argued that Killmonger was painted badly in the film, simply due to his quest for black liberation.

But while many have showed support for Killmonger’s view on black liberation and empowerment, some have also faulted it.

And truly, this is understandable.

Killmonger’s style of ‘black liberation’ was too cold for comfort and would have been oppressive to just anyone he thought was in his way.

As an full-fledged African man, I can’t criticize anyone for being sympathetic towards Killmonger. He resonated with many African-Americans, for obvious reasons, so I can understand why so many people are tweeting in support of him.

Even though I personally feel some of Killmonger’s views are very correct, it’s still safe to note that his plans, on the whole, are not.

This is no longer a period to achieve freedom through war and guns. The world has moved beyond that.

So who then is right?

Killmonger wants total revolution, but only if he is in charge. W’Kabi wants imperialism, and Nakia wants humanitarianism, and T’Challa is dealing with his confusion.

I think I have to go with Nakia’s more humanitarian views, even though many have discredited her opinion, saying they are coming from a position of privilege, as she has not really lived outside Wakanda and so has not felt in person what true oppression means.

Still, it’s easier to pick her side over Killmonger’s, which seemed on the whole more destructive.

In the movie, before Killmonger was even seen, Nakia told T’Challa that the Wakandans had a responsibility to use their resources to help the less advantaged.

She also saved the Nigerian schoolgirls who had been kidnapped by Boko Haram in Chibok (the poor attention to details excused).

She helped to save Shuri and her mother after T’Challa’s [apparent] death.

To me, that is true liberation.

Before I could even think about it, someone sitting beside at the cinema mentioned it: Nnamdi Kanu and Biafra.

Perhaps this article is going to have a continuation.