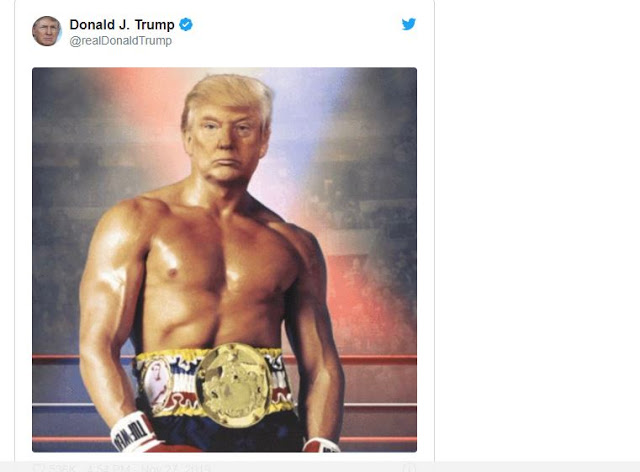 After Donald Trump took an unplanned trip to a government hospital outside Washington last Saturday, there were speculations the president has taken ill.

To quell the rumours, Trump decided to do what only a Donald can do. He posted his shirtless picture on Twitter.

In the picture, Trump appeared as a very healthy-looking, muscled bare-chested boxer.

In the photoshopped image which has been retweeted over 200K times, Trump’s head is superimposed on the hulking body of actor Sylvester Stallone from the publicity poster of the movie “Rocky III.”

On Tuesday, while giving a reelection campaign speech in Florida, Trump, 73, fumed at length about the reactions to his recent hospital visit.

He claimed that major media outlets were reporting he’d had a “massive” heart attack when he was taken to the Walter Reed Military Hospital.

The White House, in an official statement, said that Trump had simply decided to do part of his annual physical exam early, in order to save time later.

According to his last medical exam, in February, Trump is technically obese but in good health.

He rarely exercises, other than playing golf!

At the campaign rally, Trump told supporters that the heart attack rumours were false.

He claimed the doctors at the hospital could not get over his spectacular physique.

“The first thing they do is say, ‘Take off your shirt, sir, and show us that gorgeous chest. We’ve never seen a chest quite like it,'” the president said.