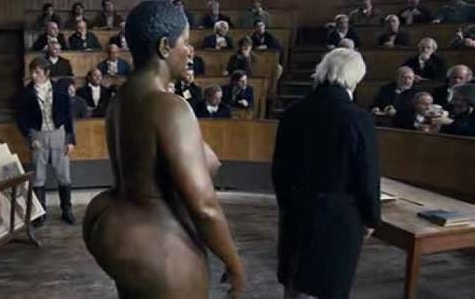 The Sarah Baartman story is a story every African woman should know.

Sometime in the late 18th century, Sarah Baartman was working as a slave in Cape Town, South Africa, when she was discovered by a British doctor named Alexander Dunlop.

Intrigued by her unusually large buttocks and genitals, he convinced her to accompany him to London.

Once there, Sarah was “displayed” as a scientific curiosity. During each exhibition, thousands would gather to watch and touch this black-skinned, big-assed wonder from Africa.

She was dubbed The Hottentot Venus and her image swept through British popular culture.

British abolitionists at that time on several occasions fought a court battle to free her from her exhibitors.

But these were all unsuccessful because Sarah herself claimed she liked her “job”.

Once the scientific community in London were tired of her, Sarah Baartman was taken to Paris in 1814 and continued to be exhibited as an anthropological freak.

Sarah lived in abject poverty; it was said that only a very minute portion of the proceeds made from displaying her ever got to her.

When her fame and curiosity started to fade once more in Paris, dear Sarah turned to prostitution to survive.

She became the object of scientific and medical research that formed the bedrock of European ideas about black female sexuality.

After her death, the Musee de l’Homme in Paris took a death cast of her body. Her skeleton was removed and her brain and genitals pickled in jars. These were displayed in the museum until as late as 1985.

After five years of negotiating with the French authorities for the return of Sarah Baartman remains, the South African government, together with the Griqua National Council which represents the country’s Griqua tribe, were able to bring Sarah Baartman back to South Africa.

On Friday 3rd of May 2002, in a moving ceremony attended by many representatives of the Khoikhoi people of South Africa, Sarah Baartman was finally laid to rest in the east of Cape Town, where she was born.

A centre for domestically abused women and children was named in her honour and today Sarah Baartman is remembered as an icon, not only by her own Khoikhoi people, but by all of Africa, where women and children have known all forms of oppression and discrimination in their lives.

We respect you, Sarah, and stand against any form of discrimination and exploitation on the true African woman.

Now with this story, would you describe Sarah as the world’s first ever and most popular video vixen to have lived?

13 Comments on “The Sarah Baartman Story”