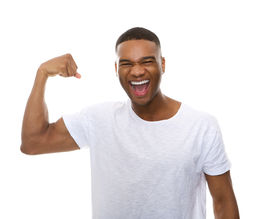 He pushed the window back to receive fresh air as the bus sped off the wet road.

His face wore a reminiscent smile as he thought about all the activities and events that had happened at the Orientation Camp: the new set of people he had come to call friends, the numerous visits to the mammy market, the early morning drills and the endurance trek.

He slid his finger across the screen of his mobile phone, going through the pictures that he had taken during the period.

His face beamed with smiles.

The bus halted for a passenger to alight.

He called out to a hawker across the road.

Without minding to look out well for approaching vehicles, the young boy sped across the road to sell his wares.

“Always look well before crossing the road,” he said to the boy as he paid him for what he bought.

The boy nodded, hastily—he was more concerned in collecting the money he was extending and passing him his change.

Without warning, the driver zoomed off and the poor boy had to complete the transaction on a chase.

Chidi had prayed hard not to be posted to the North for fear of losing his life to the ongoing terrorist attacks happening there.

Here he was now, in the bus to Akwa-ibom where he’d been posted to, smiling and feeling grateful.

He remembered his father’s advice to stay away from the indigenous women and his smile enlarged.

The old man believed that women from there use diabolical means to have their way with men.

The woman beside him was carrying a baby that had been crying all the while they started the journey.

Rheum trickled down from the child’s tiny nostrils.

The mother bent over, sucked the discharge and spat it out on the road.

The mother waved her hand at him, a gesture to mean that she
was sorry.

He looked at her sternly for a while, and then munched on the gala that he had bought earlier.

The snack tasted different in his mouth. Perhaps it was what the woman had done.

He sipped his Lacasera and tried not to think about it.

He turned off the ignition of the bus and waited.

As soon as the vehicles in front of him began to move again, he kicked the engine back to life and drove down till he was abruptly stopped by the police man at the check point.

“Where are your particulars”, the officer asked.

“Here!” He handed over some papers to him.

After some seconds of scrutiny, the officer returned the papers to him.

The driver swerved to his right and stopped the vehicle.

He came down and walked up to the police man.

They discussed in low tones for a while and the driver dipped his hands into his pocket and offered the officer a clean 50 naira note.

The officer cast an angry stare, making no attempt to take the money.

The passengers in the bus were murmuring now.

There was annoyance and heat and impatience in the air.

Chidi sipped the last of his Lacasera and flung the bottle across the road.

Just then the driver stormed into the bus and started the engine.

But as he was about speeding off, a shot shook the air.

People were screaming as they ran down.

Chidi sat motionless as the other passengers scampered into the nearby bush for safety.

The driver got down and was about to cross the road when he saw a figure leaning to the seat with ear phones plugged in his ears.

The driver reached and dragged him out of the bus.

He screamed as the body fell limply to the ground.

“This yeye police don kill dis corper because of 50 naira!” a middle-aged man at the scene shouted.

But there were no more officers in sight.

Andrew Ifeatu Jennifer is a graduate of Federal University of Technology, Owerri in Nigeria.

She blogs at Fadoflow Media and hopes to use literature to entertain and educate the public. She believes life does not exist without literature.

22 Comments on “Short Story: The Things that Happen on the Highway”