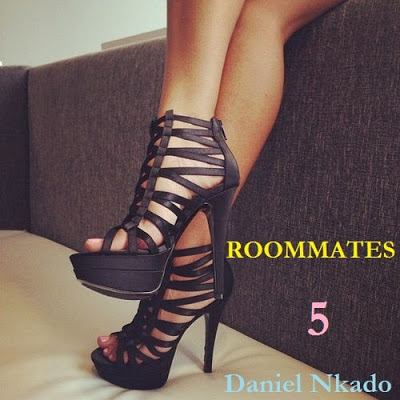 To better follow the story, read all previous episodes of Roommates, Loving Nwamgbeke and Tales from Gloria!!!

‘Where is April?’ Georgina asked.

‘April. Where is April?’

‘Georgina there should be a calendar in your room. And please stop asking me silly questions!’

Georgina looked round the wide, exquisitely furnished sitting room. ‘What am I doing here?’

Gloria rolled her eyes, sighing. ‘Georgina! You applied for a job, got interviewed and I employed you.’

‘I mean what am I working as?’

‘Yes, maid,’ Gloria said, and then added, ‘well, you got interviewed as a house manager but technically you are only just my maid!’

‘If I am Georgina then I cannot be your maid. I can’t be a maid.’

‘Georgina can never be a maid.’

‘Well, here we are and that’s exactly what you are.’

Gloria looked at her. ‘Do you want to quit?’

‘Fine then. I will just call RentAMaid and have them send me another applicant.’

‘The organization that recommended you.’

‘Hired. I hired you. Get me my phone let me call them and know if they’d be free to send me another person today.’

Gloria stared at her. ‘Georgina? Get the phone!’

‘So you no more quitting?’

‘I will quit but not until I get back myself.’

‘Well, I don’t know what happened to you, but there are dirty clothes to be washed, the floors are yet to be mopped and we got to start making dinner because my husband will soon return from work.’

‘Husband? You have a husband?’

‘Where is April?’ Georgina asked.

Gloria rolled her eyes and shook her head. ‘Oh, not again,’ she sighed.

She dropped her magazine and rose. ‘I’m going into my room to have a bath. When I get back out, it’d be kitchen time.’

She sashayed away, leaving Georgina staring.

April stood by the side of the road, hating her car, her gender, and her tiny, little muscles.

One thing feminists have failed to provide is a store to buy muscles. She can pay for a whole cup now if such a store exists. Or a whole bucket, in whatever form muscles are sold.

The sun is intense and standing on a near two-storey-tall heels, the last thing April wanted now is to start removing her shoes.

She looked at her flat tyre once again, groaned and sashayed to the edge of the road.

She flicked back her long hair and applied her man-catching smile. Today might just be yet another day to cheat on feminism.

She’s been doing it a whole lot lately. And she is really beginning to get guilty, if not uninterested in the word.

She is also beginning to miss Georgina now, whom right now in this sun she’s come understand she was right, after all.

She is Georgina. She is always right.

But she would not call her now. After this work meeting maybe, but definitely not now. Not in this sun, not in this condition, in this flat tyre.

After the meeting would just be fine—that’s if she is ever getting to the meeting again anyways.

She reached into her blue Marc Jacobs handbag in the front of the car and brought out her phone.

She dialled Loveth instead.

There is nothing Loveth hated more than being disturbed. Especially not when she is munching on a corn.

But her phone kept ringing and making annoying vibratory noise on the glass table.

Finally Loveth uncrossed her legs, dropped the TV remote in her hand and stood up.

Picking the phone and seeing it was April, Loveth hated living with someone all over again.

There is nothing more annoying than ‘squatting’ with someone, and being disturbed halfway through a meal of boiled corn and coconut by the house owner.

If only she can somehow magically add some zeros to the back of the amount in her bank account now! She would have gotten dressed immediately and gone out to look for her own apartment.

Or maybe she should be more concerned with finding her own job first.

Yes job first, before apartment. After all that was how April the Madam did it.

‘What?!’ she screamed as April told her. ‘Flat tyre again?’

Her voice lowered in resignation. ‘So what are you going to do now?’

‘Please pick a bike and come to the spot and collect the key from me,’ April said.

‘Collect the car key? What am I going to do with a car key?’

‘Come and collect the key and find a way to get the car fixed and then back to the house while I pick a taxi to my meeting. Please be fast, I’m late!’ April hung up.

Loveth stifled the urge to hiss out loud. But she failed to suppress her scowling though.

She is beginning to really see the truth in that statement – “You don’t know who your friend is until he or she rents a house in Lagos!”—now!

Loveth picked her corn and munched her way into the room to change.

She might also get her bags packed and ready, just in case April got mad and threw her out like she had done Georgina some weeks before.

April searched her handbag again and took out her mirror. She looked into it. Her makeup was becoming ruined.

The devil can tamper with all she owned: her car, her tyre, but not her makeup. She won’t survive it.

‘Hello, lady?’ A voice came from behind, mildly startling her. ‘I see your tyre is flat?’

Even before turning April imagined just how muscular a man with such a voice could be.

Perhaps he’d have enough muscles to not just change her flat tyre but entirely transform her Camry into a Ferrari, or Bugatti, too.

She applied her brain-twisting smile and finally turned to him.

And she was right.

Georgina and Gloria were in the kitchen, preparing dinner.

‘What are you doing?’

‘Slicing the tomatoes as you said.’

Gloria groaned. ‘Looks more like you are chunking the tomatoes, give me that knife!’ Gloria came over and collected the knife from her. ‘Watch me.’ She positioned herself to show Georgina the correct way tomatoes are sliced.

Georgina pretended to be watching.

‘Did you see what I did?’ Gloria said.

‘Good.’ Gloria returned the knife. ‘Now reduce everything in that bowl into slices of same shapes and sizes!’

Georgina wondered who this woman is, where she learnt how to dole out orders like this.

If she knows who she is doling out orders for!

‘Yes, the time you were snoring on my couch, someone came looking for you,’ Gloria said.

‘I don’t know, she said she is your sister or twin or something.’

The knife in Georgina’s hand clanked as she suddenly paused on what she was doing.

April thanked her saviour with a smile.

She waited for him to ask, but he didn’t.

But because he is quite cute, she decided to ask him instead.

And in response he raised a ring-restrained finger.

And April hated herself.

And all what feminism is turning her into. Men should always do the asking, the paying, the flat-tyre changing! Always! No need to argue about it.

Madam Gloria was in her room, napping, when her husband finally came home from work.

And as Georgina served his meal, he said something to her.

Something that made Georgina throw out a laugh of hollow amusement, or pity, and then walk away shaking her head.

‘Hey!’ Mr Ikechukwu called. ‘Are you not going to carve the chicken?’

In her room, she began to look through her things, to truly understand what was amiss.

And this is the beginning of a new war!