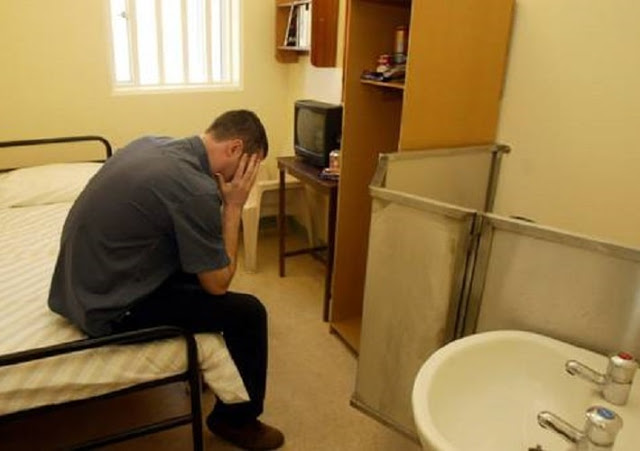 Here is what he has to say:

It is difficult to describe life in a prison because different prisoners live very different lives depending on their locations, crimes, sentences and temperaments.


What follows are some descriptions of how different prisoners are currently living in a British Cat C prison.

The stories are all real but the names have been changed.

From the start it is worth stressing that for everybody, life in prison is really unpleasant. There is very limited contact with friends and family. The cells are small (80% of prisoners are in single cells).

People are locked-up for long periods. Life is regimented. There are not enough jobs and education places to go around. There are not gangs in a British prison on a par with those found in American prisons but there are some violent men and there is much bullying and intimidation.

George is serving life with a minimum term of 15 years before he can be released on licence. He had served a long stretch before he arrived at “my” prison, has been here 3 years and has another 5 to go. He has settled down to do his time quietly. He works as a classroom orderly and volunteers as a “Listener”. He’s a softly spoken, friendly, educated man. He’s typical of many lifers (a prisoner serving a term of life imprisonment) in that the lifers are usually amongst the nicest men in the prison. They have committed a dreadful crime and deserve to be in prison but often they have lived blameless, peaceful lives apart from a very short period when they took someone’s life.

Fred is also serving a life sentence and has been in prison for over 20 years all told. Three years ago, he was released on licence but was recalled to prison after five warnings for drunken behaviour — his offending and drinking have always been connected. He has had next to no contact with his family since he has been in prison. His mother hasn’t spoken to him since the day he was convicted and his sister never visits but writes and sends money once a year or so. For Fred, the prison has become his home. When he recently had a surgery, he’d put down his wing officer as his next of kin. He was content, perhaps even relieved, to be recalled. All he said was “I want my old cell back and my old job back then I’ll be set”. He got them and is happy.

Lee is serving an indeterminate sentence for a violent assault on a gay man. Lee is himself gay but very closeted — he comes from a sub-culture where gay men are despised and attacked the gay man to disguise his own sexuality. He is a volatile man with a very quick temper — he can go from calm to raging fury in seconds and is provoked by the slightest imagined slight. He has moved from prison to prison every 6 to 9 months. In a new prison he settles down, gets a job and works very hard (he was the star worker in the kitchen) and then explodes, attacks someone and has to be moved on.

Thomas is a classic white collar criminal. He was a successful businessman for many years until his business started to lose money and he resorted to fraud) mainly against the tax man) to keep up his standard of living. He has almost another 4 years to serve. He is finding prison hard. He is responding in a very middle-class privileged way. He wants to go to an open prison but normally prisoners are not moved to open conditions until they have less than 24 months to serve. Thomas thinks this rule should not apply to him and he amassed arguments supported by letters from neighbors, paid doctors, and others including his local MP (he was once a big wig in his local Conservative Party branch) as to why he should be transferred early.

He has been turned down — quite rightly given that spaces in open prisons are in short supply so that one prison transferring early means that another is transferred late. He is not happy and moans and complains a lot but he is on a wing reserved for the over 50s where all the cells are single occupancy, every cell has its own shower and the atmosphere is quiet and very safe. He would be happier if he were to accept his position and do his time quietly.

Wayne is serving a short sentence for burglary and robbery. His offences were committed to raise money to buy drugs. He has continued to use drugs (mainly Spice) in prison. Prisoners say “a day off my head is a day off my sentence” and Wayne has taken a fair number of days off his sentence. This is not working out well for him. He has been offered jobs and education opportunities but sooner rather than later he fails to turn up and is put on “Basic” as he is at the moment. Basic is a punishment regime and means that he is banged up for 21 hours a day without a TV in a single cell and has restrictions on visits and his ability to buy from the canteen (“commissary”).

Worse he has been buying drugs on credit and now owes serious money to some nasty people. In the past, his family have paid up but have now said no more. So he has two choices. The first is to make a serious attempt to get off the drugs — if he does this he will be moved to a safe and secure wing where he can do a drug rehabilitation programme. The second is to get a transfer to another prison and hope his debts don’t follow him. Predictably, but sadly he has asked for a transfer but this takes time to arrange and so he is threatening to “kick off” to get taken to the segregation unit. A pretty miserable life.

John is at the other end of the scale from Wayne. He was convicted of supplying drugs and has kept up the trade in prison. He was in a gang outside and is leading a gang inside but the gangs are nothing like American street or prison gangs — they are groups of friends generally from the same areas (post codes) who co-operate in crime but don’t have structures that span multiple prisons, don’t have codes and rule books and don’t have names and brands.

He gets the drugs into prison in various ways — throw-overs, drones, smuggling during visits and corrupting staff. He never touches the drugs himself but uses his associates to bully other prisoners into holding the drugs. He will think he is doing well and that life in prison is good but he has been identified by the prison as a prime mover in the drugs trade and in 4 or 5 weeks time he will be moved to a more restricted prison.

All thanks to Jeffrey Richardson for this very enlightening piece.