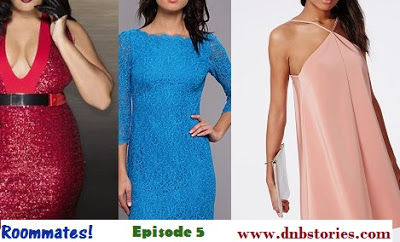 Georgina came through the door first. She took off her shoes and started removing her accessories.

‘Georgina, are you sure you are okay?’ April asked. ‘You’ve been awfully quiet since we were in the taxi.’


‘Swallowed what?’ Loveth asked, her brows lifted in confusion.


‘The ring. I swallowed the ring. I have a metal in my stomach!’


‘Which ring are you talking about?’ April looked just as lost.


‘The ring at the boutique. I swallowed it.’


Loveth’s lips burst open. ‘I thought you told the guy you had nothing.’


‘Yes, I told him I had nothing, and he saw nothing, but that’s only because I have swallowed the ring before he got there. I swallowed it. I put it in my mouth and swallowed it down.’


Georgina was staring at her. ‘Nne, that scream will not help me now, inu?’


‘What are we going to do?’ Loveth asked. ‘April, please let’s take her to the hospital.’


‘I don’t want to go to the hospital,’ Georgina said.


‘You don’t want to go the hospital?’ Loveth asked her. ‘So you will prefer walking about with a ring in your stomach? What are you now, Lady Smeagol?’


Georgina was staring at the girls with pitiable eyes.


‘I can induce her to vomit,’ April said.


‘How are you going to do that?’ Georgina asked her. ‘Are you a doctor?’


‘She is in Biochemistry,’ Loveth said.


‘Pull off your clothes and come into the bathroom with me,’ April said.


Georgina was slow, staring at April.


She pulled off her blouse and jean trousers first, and then the first gown and the second.


The girls were shocked.


‘Two gowns, what else did you steal?’ April asked.


‘Nothing else, I swear!’ Georgina touched her tongue with her fingertip.


‘You must return all these.’


‘Yes, yes, I will return them once the ring in my stomach is out.’


Now only in her pant and bra, Georgina followed April into the bathroom.


‘Loveth, bring me the bottle of olive oil,’ April called from the bathroom.


She took the bottle from Loveth and poured a capful of the oil and gave Georgina to drink.


April turned on the tap sticking out from the tiled wall of the bathroom. She washed her hand under the water.


She then forced two fingers into Georgina’s mouth, deep down her throat till she started to gag.


She removed her fingers and held Georgina down.


The golden ring came out in the midst of transparent slimy mess. Georgina quickly picked it and washed it under the running tap.


She came out of the bathroom looking like a rat that had seen a ghost. Her eyes were watery and reddish.


Loveth started to laugh. ‘Thank God for April, otherwise that ring would have rusted your intestines.’


Georgina dropped to the mattress. She looked exhausted.


‘Pack everything, we are taking them back,’ April said.


‘Take what back, ma?’ Georgina asked her.


‘The gowns and the ring, or did you pay for any of them?’


‘I should take back even the ring I vomited?’


Georgina scowled at her. ‘Fati-bombo, you will not rest now.’


‘Rest ke? I vomit anything? Na person wey vomit golden ring suppose rest na. Chai, but Georgina, you are bad o! You just swallowed the ring fiam! How did it even pass down your throat?’


‘It’s possible the ring was not completely swallowed,’ April said.


‘Even the Lord of the Ring will fear this girl!’ Loveth said.


Georgina was scowling at Loveth. ‘Ewu!’


‘Ehe, wait o, are you sure it is only one ring that you swallowed? Did I not see you take one shoe from the rack at a certain time?’


Georgina picked the pillow and threw it at Loveth. ‘It is you that will swallow shoe, baby elephant!’


Loveth was laughing. Georgina stared at her and then started to laugh too.


‘Quit playing, ladies,’ April said. ‘It’s getting late, we need to return these things to the boutique.’


Georgina turned to April. ‘Madam Obioma, INEC Returning Officer, wait o let me ask you, what are we going to tell them when we get there? Eh?’


‘Are you asking me that?’ April said. ‘You are the one that stole the items. You explain to them yourself.’


‘Ok, I have an idea,’ Georgina said. ‘You will hold one gown, Loveth will take one and I will hold the ring. When we get there, we will tell them that we each of us mistakenly picked what we are holding.’


‘My dear, we are all thieves in this world,’ Georgina said. ‘Your survival depends on it.’


Georgina put her hand up. ‘See April o, abi na May. Let me hear word jare! You think I have not heard how you snatched Harry from Gift.’


‘That’s a lie,’ April said. ‘Harry and I met and fell in love. I didn’t steal him from anybody.’


‘Ehe, was he not dating Gift at that time? Was it not through Gift he met you? And then you saw that he is loaded and quickly used your kuwakpa to conukolize him to yourself. Babe, what you did is even armed robbery, burglary, breaking and entering. But I am proud of you sha. You are tough!’


April was staring at Georgina.


Georgina stood and picked the gowns. ‘Well, since we have all now agreed that we are all thieves, let me keep what I have stolen safe and secure just like my sister here have done.’ Georgina eyed April. ‘As you can see, I am learning from the best.’


‘Well, that’s for the two of you,’ Loveth said. ‘Because as for me, I have not stolen anything in my entire life.’


‘Yokozuna, shut up!’ Georgina said. ‘Nobody is talking about you!’


The girls started preparing around six.


After meticulous depilation, they went on constructing their faces. They layered on adequate foundation, contoured and concealed. Then they lined, shadowed and fixed up their lashes.


All the time they were on it, April reminded them, ‘Brows, girls, the miracle is in your brows!’


April turned to look at Loveth. ‘Cut down the blush, girl,’ she said to her.


Georgina looked at Loveth. ‘You should have left her na,’ she said, ‘maybe she wants to perform as a geisha at the party.’


By 10:30, they finally stepped out of their room in lavish glamour. April dazzled in silky pink, Loveth bold and fearless in her sequined ruby and Georgina, all class and glamour in cerulean blue.


Inside the taxi, Georgina reminded them again.


‘Remember, ladies, that we are not attending this show as students. We are celebrities in our own right.’


‘I am still imagining though,’ began Loveth, ‘if we are celebrities, then what kind? Are we singers or actresses, and who knows us?’


‘Who cares?’ Georgina said. ‘We can be actresses from Ghana or Cameroon, it’s a big show. The most important thing is how you carry yourself. Now listen to me, we must not clap or shout when a celebrity is performing. If you must clap, do it the Anna Wintour style.’ Georgina tapped gently on her lap in demonstration. ‘And don’t go asking anybody for autograph o! You should be the one giving autographs.’


The taxi man turned to look at them again, and again, Georgina barked at him to watch the road.


‘Don Jazzy is coming,’ Loveth said. ‘It will take a lot of force to hold myself from screaming o.’


‘Now lastly, girls, we must remember to act made.’


‘Made?’ April came through first. ‘What does that mean?’


‘It means simply that we shouldn’t talk to just anybody. If we find any man worthy enough, then we should bill the discussion.’


‘What does that mean?’ Loveth this time.


‘It means when he asks you what you’d like to have, you don’t go giving out poverty-stricken replies like ‘anything is okay for me’ blah blah blah. No! Made people have brands. Always mention yours with dignity and grace.’


April hummed. ‘Hmm, so says the one in a stolen gown.’


‘Madam September or whatever you call yourself, how many times do I have to tell you that I didn’t steal this gown? I just lifted it. There is a big difference!’


April nodded. ‘I see. Tell me the difference.’


‘The difference is that lifting is a normal thing. Go and ask, even the queen of England lifts.’


The taxi driver turned to look at them again.


‘Oga, I swear, if you turn to look at me again eh, I will remove my shoe and conk your head with it.’


Georgina hissed. ‘Sorry for yourself! I don’t know if you’ve not seen celebrities before!’