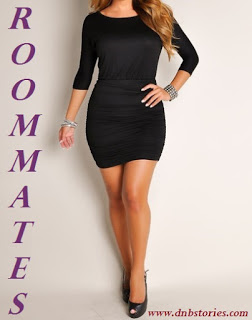 Georgina wanted to drop the handbag to the ground, but then she looked and saw it was Prada.

Upstairs, as soon Rachel entered the bathroom to have a bath, she ran to the bag and opened it.

‘What are you doing?’ April whispered.

She peered into the bag and her eyes became bulged. She brought out two Apple iPhones.

‘April, I told you!’ She showed April the phones. ‘This girl is a thief, see!’

She started to bring out the other items in the bag: expensive makeup items from major foreign designers, a box of tissue wipe, a small purple purse and a Nora Roberts novel.

‘Put those back, Georgina,’ April said to her.

‘Hey,’ Georgina cried, shrugging and ignoring April. ‘This girl is a thief o. A thief on the run!’ She held the bag and turned it over. A small brown notebook and a fancy pen and some other items fell out. ‘April, she is a thief, we can’t allow her to stay.’

‘How can you know that for sure?’ April asked.

Georgina pointed at the items. ‘Just negodu, look! Two iPhones, who does that?’ She picked a silver tube. ‘This primer alone costs nothing less than 10K.’

‘And you think some people can’t afford that?’

Georgina started to pack back all the items.

Rachel came out in April’s pink towel. ‘I’m sorry, can I get a light dress to wear?’ she asked April.

She was checking through the clothes that hung in the wardrobe when her phone started to ring.

She turned. ‘Please pass my phone, girl,’ she said, referring to Georgina.

Georgina pretended not to hear.

Rachel stared at her and then went and took the phone herself.

She took the call and put the phone to her ear. ‘I’m fine, mum.’

‘I am somewhere and I’m safe so you need not to worry.’

‘Yes.’ She let out a tiny groan and shook her head. ‘Always so jittery.’

April smiled. ‘That’s what mothers do.’

Rachel turned back to the wardrobe and Georgina turned to stare at her with a grimace.

‘So are you hungry?’ April asked Rachel.

‘Okay, I think we can just make noodles and manage for the night, Georgina what do you think?’

Georgina gave an awkward smile. ‘Believe me, April dear, the last thing you want to hear now is what I think.’

Rachel smiled. ‘Thank you. Would have fitted better two months ago when I haven’t put on this annoying weight.’

‘Okay, so what do you say about the noodles?’

Rachel almost winced. ‘I’m not that much of a noodles person,’ she said.

‘First time I had a noodles meal was in a restaurant in Tokyo, it is not an experience I’d like to revisit.’

Rachel turned to her, surprised. ‘What’s wrong with her?’ she asked.

Rachel turned to April. ‘There should be a nice restaurant one can find a decent meal around here, right?’

‘We should go then.’

‘You not going with us?’ Rachel asked her.

Georgina shook her head. ‘I love noodles,’ she said with a sarcastic slur.

They left and Georgina pulled out of the bed and rested her chin on one hand.

About an hour and some minutes later, they knocked.

Georgina got up at the fourth knock.

She opened the door and April and Rachel entered, chatting and laughing like they’d known each other since childhood.

Georgina went back to sit on the chair. A plate of blank noodles and two eggs was on the table before her.

April turned to her. ‘What?’

Rachel turned to Georgina. ‘Girl, can you take the plate of noodles to somewhere else please? The sight of it nauseates me.’

Georgina pretended not to hear.

Georgina stood. ‘Listen, I’ve been keeping quiet because you obviously don’t know who I am, but I must warn you, tread cautiously.’

Rachel only stared, incomprehension on her face. She turned to April and asked, ‘What is wrong with her?’

April said nothing and went to sit on the bed.

Georgina held Rachel’s arm and drew her back. ‘You want to know what is wrong with me?’

‘Crap!’ Rachel screamed instead and her hand flew to her mouth. She ran into the bathroom.

When she came out, her eyes were red and teary.

‘Are you okay?’ April asked her.

She gave a weak nod and dropped to the bed.

In the morning, after praying, Georgina tapped her. ‘Hey, wake up!’

Rachel turned and then stretched out her arms.

Finally, she opened her eyes.

‘Go and bathe, you will be late,’ Georgina told her.

‘For the park. Which park are you using sef?’

‘I’m sorry whatever do I need a park for?’

‘A park is where people get buses to go to their destinations. Stand up and get ready.’

Rachel put one palm over her yawning mouth. ‘I’m sorry, my dear, but I’m not leaving today.’

‘I’ll be here till my brother returns.’

‘You must be joking!’

April came awake. ‘Georgina what is it?’

‘Imagine this girl o! She said she is no longer leaving, that she would be here till whoever she came looking for returns.’

‘Sorry I forgot to tell you yesterday, Rachel will be here till her brother comes back,’ April said.

‘She is leaving! And this minute!’

Rachel quietly lay back to sleep.

‘You’ve not seen anything, now stand up!’

Rachel did not budge.

‘Oh crap!’ Rachel’s right palm flew to her mouth. She struggled up from the bed and rushed into the bathroom.

As her retching continued, April turned to scowl at Georgina.

‘What?’ Georgina said, pulling a defensive look. ‘I didn’t do anything to her.’

April’s phone started to vibrate. She picked it from beside the mattress and checked the caller.

She smiled and took the call.

She laughed. ‘Silly! When are you coming back jor?’

Georgina was staring at April with her face pulled back. ‘Who is that?’ she asked.

‘When did you guys meet that you are calling him honey?’

‘You will meet him next week.’

The bathroom door opened and Rachel came out.

‘Are you okay?’ April asked.

‘So, I don’t know, do you like vomit all the time someone talks back at you?’ April asked her.

‘Naa. I just have a sensitive gut, that’s all.’