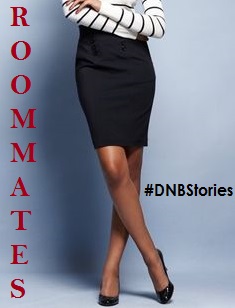 He threw away his cigarette, stepped on it with his shoe and made his way towards her.

Now in her front, he slotted both hands into the pockets of his trousers and pushed out his lower half a little.

‘You are dead,’ April managed to utter.

‘Stabbed a dozen times by you, yes, but dead? No.’

‘All thanks to the good nurse at the hospital where my darling wife dumped me. She was very cooperative.’

Josh gave a slight shake of head. ‘No more questions from the past. It’s a new year. It’s time for a new beginning now.’

April bent and picked her bag from the ground.

Walking off, he grabbed her hand, so tight she felt stinging pain.

‘I know you and your friends, I’ve seen you all, but I haven’t seen her. Tell me now, tall one, where is she?’

April jerked her arm away from him. ‘Get your filthy hands off me, you ugly animal!’

Josh gave a rather cute smile instead.

April swallowed down one large breath and ran off.

He stood there for long, watching till the last of her was out of sight.

‘Don’t call this line ever again!’ Philomena snarled into the phone and dropped it on the bed.

Inside the kitchen, Loveth dropped the knife she was holding and screamed.

Philomena ran up and rushed into the kitchen.

Loveth pointed at the wall. ‘Look!’

Philomena looked. ‘What is that?’

‘It just flew above my hand,’ Loveth said, ‘I think it stung me.’

Philomena shrunk with a sigh. ‘Loveth, it is only a cockroach and cockroaches don’t sting.’

Loveth touched her temple again. ‘What?’

‘Are you sure? What if there are species that sting?’

Philomena sighed again and shook her head in disbelief.

She took a piece of paper towel and reached to the wall where the bright-brown insect was perching.

But before she could pick it, it flew off again and Philomena dropped the paper and ran out of the kitchen.

Loveth was behind her the same instant.

‘Why did you run?’ Loveth asked.

‘I think that’s the one that stings!’ Philomena said, panting.

Loveth walked past her to the front.

‘What is it?!’ Georgina screamed in the bathroom.

Just then soap foam got into her eyes and the soap bar she was holding slipped out of her hands.

Bending and trying to find the soap, she tripped and screamed.

She sat naked on the bathroom floor for long, till the pain at her sides had eased and she rose and finished her bath.

‘All these bush girls April picked from God-knows-where will not allow somebody to have peace in this house,’ she murmured to herself.

When she came out in her towel and bruised arm, she asked Loveth and Philomena what their problem was.

‘There is a big cockroach in the kitchen,’ Philomena said.

‘What?’ Georgina shifted her gaze to Loveth.

Without another word, Georgina made her way straight into the kitchen.

The next minute she was out again, holding the cockroach and coming toward Loveth and Philomena.

Loveth screamed first and ran. And then Philomena.

‘What’s going on here?’ she asked.

‘Georgina wants to throw a cockroach on us!’ Loveth said.

‘Georgina, go into the kitchen and put that cockroach back into the flask where I kept it,’ April said.

‘You what?’ Philomena spoke first.

‘Madam, first it was rat and now cockroach too?’

‘Be fast and come out, there is something you all have to hear.’

‘That innocent cockroach in your hand is not the one we should be running away from!’

Somewhere on the other side of town, two old friends sat together for a drink.

As they talked and reminisced on old times, a phone picture was exchanged.

‘I think I know this girl,’ Mrs Eucharia Onwa said.

She peered into her friend’s phone one more time.

And this was how the two big women came to understand that the girls they both were after are actually best of friends and roommates.

Lady B took a sip of her wine. ‘Uk, I hope you still believe two heads are better than one,’ she said.

‘Of course, Beatrice,’ Mrs Onwa agreed. She gently fingered her necklace. ‘No stupid student has the right to make a grown woman wear fake gold.’

The two ladies smiled devilishly and clinked their glasses.

Georgina pulled an incredulous smirk and said, ‘April, please, you only saw one episode of The Walking Dead two nights ago and now you’ve started seeing dead people, are you okay?’

‘Zombies can’t do that,’ Loveth said.

‘Who is Josh?’ Philomena asked.

Just then someone banged on the door.

Loveth ran up at once and hid behind Georgina.

The door was banged again, gentler this time.

‘Who is that?’ Georgina screamed.

Nothing came from outside.

Instead, light came on Philomena’s phone and it began to vibrate and ring.

It was this same night that the lecturer called Mr Okeruoha had a dream.

He woke up with a smile, his heart filled with tender emotions.

He rose from his bed and reached for a booklet on his table.

He took his pen and changed the score on Loveth’s column from 6% to 26%.

He didn’t go back to sleep afterwards; he played a love song instead.

But little did he know that the thick and pretty roommate he’d been nursing feelings for might not survive the night.